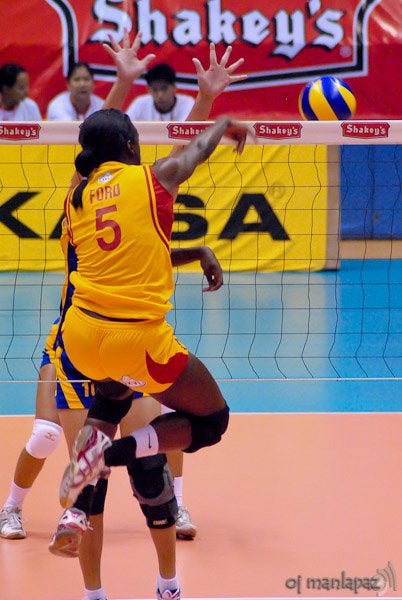 The 6-foot-2 former University of South Carolina standout sparkled with a personal conference-high 27 points to power the Lady Stags past the Lady Eagles, 24-26, 25-21, 25-16, 25-10, last night in the Season 8 Open Conference at the FilOil-Flying V Arena in San Juan.

Cherry Macatangay, who wound up with 18 points, bucked a sprained ankle to deliver the Airwomen’s last two points on service aces, picking up from where Aiza Maizo left off early in the fifth set.

Maizo, the former University of Santo Tomas star, topscored with 25 points and Jeniffer Manzano finished with 16 for Air Force, which pulled away from 10-9 in the deciding set.

The Airwomen improved to 2-2, the same card of Ateneo, while the Lady Altas fell to 0-4, after losing a fifth setter for the second time.

Thai import Jeng Bualee and Analyn Benito also made significant contributions with 22 and 15 hits, respectively as the Lady Stags, who jacked up their record to 3-1, clinched a place in the quarterfinals with two games to spare.

“We were playing a really strong team in Ateneo and I think that was our motivation to come out strong,” said the 26-year-old Ford, who has played for clubs in Spain, Switzerland, Finland and Germany.

Ford was on attack-mode right from the get-go, linking up brilliantly with setter Rubie De Leon to convert 23 of 38 attacks. She was also a force on the defensive end with four blocks.

“She’s adjusting well to our system,” coach Roger Gorayeb said of his prized import. “I think she can still get better as the tournament goes on.”

With Ford patrolling the net, Ateneo’s lead hitter Alyssa Valdez struggled with just 12 hits out of 49 attempts, and the Lady Eagles lost for the second straight game after opening the tournament with back-to-back victories.