Ravena leads Ateneo past UP, Marata 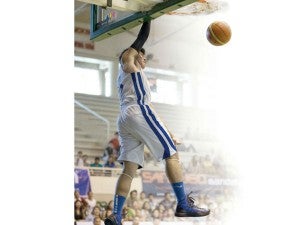 MANILA, Philippines – Ateneo quashed a late-game uprising by University of the Philippines and hacked out a 72-64 victory Sunday in the UAAP men’s basketball tournament at the Mall of Asia Arena.

A two-handed slam from Chris Newsome punctuated the game for the Blue Eagles, who led by as many as 19, with 31 ticks left after Sam Marata towed the Maroons to an 8-0 run in a span of two minutes.

Ateneo got the cushion to absorb UP’s blows down the stretch as it started to break away just before halftime on efforts by Ryan Buenafe.

Then Kiefer Ravena led them to full speed in the third, pouring nine of his season-high 15 in that quarter.

“Good thing about this is Kiefer is already 50 percent, watch out for the other half. That gives us confidence,” said head coach Bo Perasol.

The Blue Eagles avoided the bottom with their second victory in six games and remained just a notch again of cellar-dweller UP, which sunk to 0-5.

“They are really a very dangerous team,” said Perasol of UP. “Their not winning a game is not a reflection of what they truly can do.”

Marata chalked up a game-best of 22 points for the Maroons, who led briefly 28-27 midway the second period, while Jason Ligad and Chris Ball had 10 each.