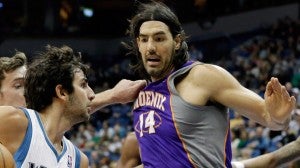 PHOENIX  — The Indiana Pacers have bolstered their front-line depth with the acquisition of Luis Scola from the Phoenix Suns.

Scola, a 6-foot-9 forward from Argentina, played his first five NBA seasons with the Houston Rockets before coming to Phoenix a year ago when the Suns submitted the winning bid under the league’s amnesty rule. He appeared in all 82 games for the Suns, averaging 12.8 points and 6.6 rebounds. It was the fifth time in his career that he’s played in all games.

Scola, who has averaged 14.2 points and 7.5 rebounds in his career, joins a team that figures to contend in the Eastern Conference after he toiled for a season with a Suns squad that compiled the worst record in the Western Conference and second-worst in the franchise’s history.

The 6-foot-8 Green has played for six teams since coming to the NBA in 2005. Signed as a free agent by Indiana in 2012, he appeared in 60 games, averaging seven points per contest. The 6-11 Plumlee was selected in the first round by the Pacers out of Duke last year, the 26th selection overall, but appeared in only 14 games for the deep, talented Indiana squad.

Not surprisingly, Scola said he was “very, very excited to play for the Pacers.”

“They are one of the top three teams in the NBA with a good shot to win a championship,” Scola said in a Pacers news release announcing the Saturday trade. “I think it’s a great team and this is a great opportunity. I can’t wait.”

“He has NBA experience, international experience and is the type of player that will fit nicely on our roster,” Bird said.

Since returning to the Pacers in late June after taking a leave of absence for health reasons, Bird has re-signed power forward David West, then spent most of his time strengthening the Pacers bench.

He’s been able to make the moves without going over the NBA’s luxury tax threshold – something Bird has said he will not do.

The price for Scola wasn’t particularly high, from Indiana’s perspective.

Pacers fans have grumbled constantly about the lack of productivity from Green, who still has two years and $7 million left on the free agent deal he signed last season, and Plumlee spent much of his rookie playing time with the Fort Wayne Mad Ants of the NBA D-League.

New Suns general manager Ryan McDonough called Plumlee “one of the best players” in this year’s Summer League, where the big center averaged 10 points, 9.5 rebounds and three blocked shots. McDonough also said that Green will add athleticism and scoring ability to what is designed to be an up-tempo style under new Phoenix coach Jeff Hornacek.

Phoenix is undergoing a roster overhaul in what could be a lengthy rebuilding process.

Plumlee gives the team a second young center. Phoenix used the fifth overall pick in this year’s draft to select Maryland’s Alex Len, a 7-foot Ukrainian who is recovering from right ankle surgery.