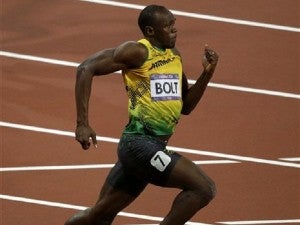 Bolt’s presence, along with Britain’s double Olympic 5,000-10,000m champion Mo Farah, will at least offer a ray of sunshine to a sport that has been recently rocked by a series of doping offences.

There is also a long list of star performers ruled out through injury, not least of all defending 100m champion Yohan Blake of Jamaica, Kenyan 800m master David Rudisha and Olympic heptathlon champion Jessica Ennis-Hill.

Blake claimed victory in Daegu two years ago after Bolt dramatically false started in the final of the blue riband event and was disqualified.

Make no mistake that Bolt is in the Russian capital to top the podium in an event he has dominated since taking gold in the Beijing Olympics in 2008.

“Of course it’s very important (to win back the title),” the 26-year-old said of the 100m, which will feature neither American rival Tyson Gay nor Asafa Powell after both tested positive for banned substances.

But Saturday’s heats will include 2004 Olympic champion and double world champion in 2005 Justin Gatlin, the in-form American who has already served a four-year ban for doping, and who beat Bolt in Rome this season.

Bolt’s failure to win Daegu has been the one blip on his impressive resume that includes Olympic gold in the 100m, 200m and 4x100m relay events in Beijing and London, and five world titles.

He is also world record holder in the individual events (9.58 and 19.19sec respectively) and was part of the relay team that set a new record in London (36.84).

“I want to keep winning every race that I compete in and the 100m and 200m finals in Moscow will be the biggest races for me this year,” the Jamaican said.

Should he claim three golds – and a lot can go wrong in nine days of safely negotiating heats and best managing related fatigue and expectations – he would draw level with Carl Lewis, ironically someone who has drawn Bolt’s ire on more than one occasion.

After winning the 200m in London, Bolt said he had lost all respect for Lewis after the US sprint legend restated his concerns over the toughness of Jamaica’s drug-testing policy.

Embarrassingly for the organizers, Russia have more than 40 athletes currently suspended for doping offences and Turkey took the draconian step to ban 31 of its athletes the weekend before the worlds.

The doping issue will not, however, detract from the action on the track, where American Allyson Felix is looking to better her tally of eight golds, one silver and one bronze when she goes in the 200m and the relays.

Aged just 27, Felix is now considered one of the elder stateswomen of a strong US team, and has rightly re-focused on her preferred 200m after over-stretching herself in Daegu and losing the title to Campbell-Brown.

Britain’s Farah, whose double Olympic gold in the 5,000m and 10,000m last year deservedly shared the headlines with Bolt’s second treble gold, has been in sparkling form this season.

After stepping down to hone his speed ahead of Moscow, Farah set a personal best in the London Diamond League before then being swept home to a European record (and sixth fastest time ever) in the Monaco 1500m behind Kenyan Asbel Kiprop.

“Of course, it is going to be very tough in the worlds,” the 30-year-old Somali-born athlete said.

“The competition will be fierce again, and I will need to be as good, if not better, than 12 months ago.”

Kenyan hopes on the track have been hard hit by the absence of Rudisha, 5,000-10,000m champion Vivian Cheruiyot, and two-time marathon champion Abel Kirui.

“It is going to be tricky,” said head coach Sammy Rono, adding that he was counting on the experience of world and Olympic 1500m and 3000m steeplechase champions, Asbel Kiprop and Ezekiel Kemboi, plus defending women’s marathon champion, Edna Kiplagat.