Athletics: Farah and Bolt to blow away doping blues 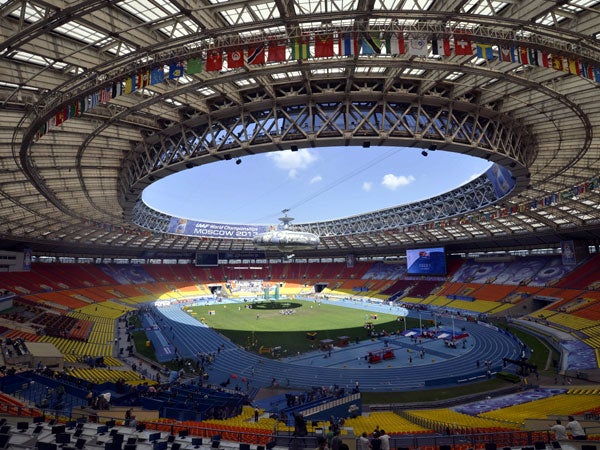 Workers make final preparations on the eve of the World Athletics Championships start at the Luzhniki stadium in Moscow, Russia, Friday, Aug. 9, 2013. AP

MOSCOW – The first day of the World Athletics Championships on Saturday could not have been better organized, with two of the biggest stars lined up for action after a doping-tainted run-up to competition.

Britain’s Mo Farah is odds-on favorite to claim gold in the men’s 10,000m while Jamaican sprint star Usain Bolt faces his first outing at Luzhniki Stadium in the heats for the 100m.

The day’s other final comes in the women’s marathon, featuring defending world champion Edna Kiplagat of Kenya against reigning Olympic champion Tiki Gelana of Ethiopia, who is looking for a first marathon title for her country.

Farah was one of the faces of the London Olympics after he claimed double gold in the 5,000 and 10,000m.

The Somali-born 30-year-old has not have run over 25 laps of the track since his triumph on home soil last August but he seems in prime form to go one better than in Daegu two years ago.

Dropping down distances to hone his speed, Farah shocked many observers by claiming a European record in the 1500m in Monaco this season. His time of 3:28.81 was the sixth-fastest ever run.

Ethiopian Ibrahim Jeilan, defending world champion, did not compete in London and has been overtaken somewhat by his team-mates, notably Olympic 5,000m silver medallist Dejen Gebremeskel, Abera Kuma and Imane Merga — fifth and third in Daegu two years ago.

The 100m, with the semi-finals and final to be run on Sunday, seems Bolt’s to lose. He was sensationally disqualified in Daegu after a calamitous false start in the final and now-injured team-mate Yohan Blake took gold.

The field for the blue riband event has been significantly diminished after the positive doping tests for American Tyson Gay and Jamaica’s Asafa Powell.

Gay’s teammate is Justin Gatlin, the 2004 Olympic champion and double sprint gold medallist in the 2005 worlds who went on to serve a four-year drugs ban.

Gatlin claimed bronze in the London Olympics and is the most likely source of an upset as a proven performer on the big stage and having already edged Bolt over 100m in Rome this season.

After wrapping up a unique double triple at the London Olympics, Bolt said it was not he who was the best athlete but Ashton Eaton.

The 25-year-old American kicks off the defence of his decathlon title early Saturday, action in the first of the two-day event’s 10 disciplines starting with the 100m, the long jump, shot put, high jump and 400m.

Eaton, only the second decathlete to go beyond the mythical 9,000-point mark, holds world records in both the decathlon (9,039) and heptathlon (6,645) and will be looking to go one better than Daegu where he won a silver medal behind teammate Trey Hardee.

“It does take a toll on your mind and your body. But I would say I’m ready to go.”

There are also qualifying events for the 800m, pole vault, hammer, and high jump for the men, and 400m, 3000m steeplechase, discus and long jump for the women.

While Bolt is a serial world record setter and the current leader in both the 100 and 200m, another source for a likely world record will be going in the men’s high jump.

Ukrainian Bohdan Bondarenko has hit some outstanding form in the run-up to the worlds. Cuban Javier Sotomayor’s record of 2.45m has stood since 1993, but the 23-year-old Ukrainian might just have what it takes to challenge.

At this season’s Diamond League meet in Lausanne, Bondarenko cleared 2.41m, placing him third on the all-time list behind Sotomayor and Sweden’s Patrick Sjoeberg.

He also had three good efforts at 2.46m to send a ripple through the high jumping world, and will have to replicate that form in Moscow in the face of some stiff opposition from Olympic champion and local hero Ivan Ukhov.