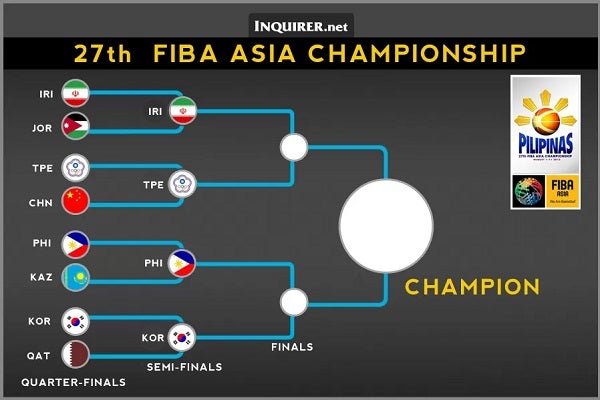 South Korea handily put away Qatar, 79-52, Friday night at the Mall of Asia Arena, to arrange a rendezvous with the Filipinos in the semis on Saturday.

In the 2011 Asian championships, the Koreans broke hearts with a 70-68 victory which ended the Filipinos’ chance of making it to qualifiers for the 2012 London Olympics.

But the fact they are playing on the Filipinos’ home turf makes a difference in their meeting this year, said head coach Jae Hak Yoo.

“We hope that the experience we had in the Jones Cup in Taipei will benefit us tomorrow,” said Yoo about facing the Gilas Pilipinas team backed by the crowd.

Cho Sungmin paced the Koreans against the Qataris with 16 points, Sueng Jun Lee added 12 markers in just under 16 minutes of action.

“Obviously they play with a lot of energy. It’s going to be very exciting. The fans here are amazing,” said the Lee, the squad’s energy guy.

South Korea and the Philippines clash at 8:30 p.m. at the same venue while Iran and Chinese Taipei, the other semifinalist, slug it out at 5:45 p.m.