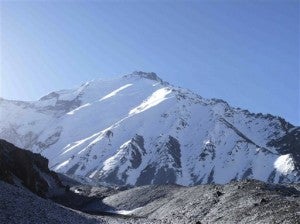 Foreign and local climbers have recently scaled Afghanistan’s highest mountain, indicating that some areas of the war-torn country are ready for a revival in international tourism, an expedition member said Sunday.

The summit of 24,580-foot (7,492-meter) Mount Noshaq, located in the Wakhan Corridor of northeastern Afghanistan, was reached by a team on Aug. 4, said Anthony Simms of the New York-based Wildlife Conservation Society. Foreign tourists are already visiting the region — an oasis of peace but which suffers grinding poverty — and future climbing expeditions are likely.

“Mountaineering expeditions are particularly effective at putting money into the local economy — they are not cheap undertakings,” Simms said in an email to The Associated Press. “So through our expedition, we hope to see more mountaineers visit Wakhan, and in turn see more money going to the local people.”

Simms, the WCS’s Afghanistan program technical adviser, said 200-250 tourists were now coming each year to Wakhan, an isolated panhandle of land connecting Afghanistan with China that has been closed off to the outside for decades as the country reeled from incessant warfare.

WCS says other areas of Afghanistan, noted for its stunning mountain scenery, have opened up to domestic and foreign tourists. Among these regions is the central province of Bamiyan, home to Band-e-Amir, the country’s first national park, as well as giant 1,500-year-old Buddha statues dynamited by the Taliban a decade ago.

“Despite the turmoil that continues in some parts of the country, Wakhan is just one of a number of areas in Afghanistan that are very safe from a security standpoint, and where tourism is already providing jobs and improved livelihoods for local people,” Peter Zahler, deputy director of WCS’s Asia program, said in a recent press release.

Afghanistan was a major draw for international tourists before the invasion by Soviet Union troops in 1979. These included climbers in Wakhan, where the laying of land mines during the country’s civil war in the 1990s further isolated the region, which is also home to snow leopards, Marco Polo sheep and other wildlife.

Simms said the Noshaq expedition involved two Australians, including himself, two Afghan climbers and two Afghan support personnel. The mountain was first climbed in 1960 by a Japanese team.

“One of the primary reasons for taking these guys was to train them to independently lead expeditions in the future,” he said.

In recent weeks, two tourist parties visited Noshaq, Simms said. A small Belgian group trekked to the mountain’s base camp and a seven-person Polish team “should be summiting any day now, if all goes well,” he said.