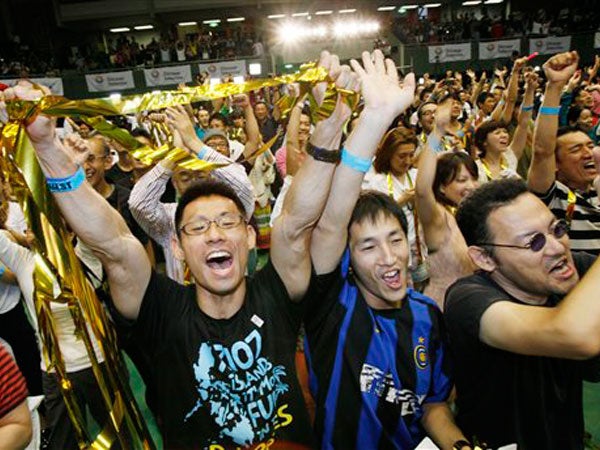 Japanese celebrate after Tokyo won the bid to host the 2020 Olympic Games, in Tokyo early Sunday morning, Sept. 8, 2013. Tokyo competed with Madrid and Istanbul for the right to host the 2020 games. AP

BEIJING – Chinese Internet users on Sunday mocked state media for mistakenly reporting Istanbul would host the 2020 Olympic Games, the latest in a series of gaffes by the government-backed press.

Tokyo was the eventual winner. Both reports were later withdrawn, but continued to circulate in Internet postings.

“They made fools of themselves,” said Yan Tao on Sina Weibo, a microblog service which is China’s equivalent of Twitter.

Xinhua apparently mistook a vote by International Olympic Committee members to decide whether Istanbul or Madrid would advance in the voting after a first-round tie, which the Turkish city won.

“Liars must be held accountable, otherwise it’s not fair,” said another who gave the name McMonkey, referring to an on-going government crackdown on people who spread rumors on the Internet.

In another case, the People’s Daily newspaper last year reported North Korean leader Kim Jong-Un had been named 2012’s “Sexiest Man Alive”, after treating a spoof award by satirical US website “The Onion” as genuine.

But some of the Internet comments in China, whose capital Beijing hosted the 2008 Summer Games, had an anti-Japanese tone as the two countries are locked in a territorial dispute.

“It’s an international joke to let this country host the Olympics,” said one under the name Kid Green.

“Hope they can settle the matter of the Diaoyu Islands and ‘comfort women’, admit the massacre and face history.”

Both Beijing and Tokyo claim islands in the East China Sea, called Diaoyus by China and the Senkakus by Japan, which administers them.

Wartime history also remains a sore point between the neighbors, including the 1937 “Nanjing Massacre” and the use of women from China and other countries in military brothels during World War II.