Michael Jordan: Tanking games no way to build a franchise 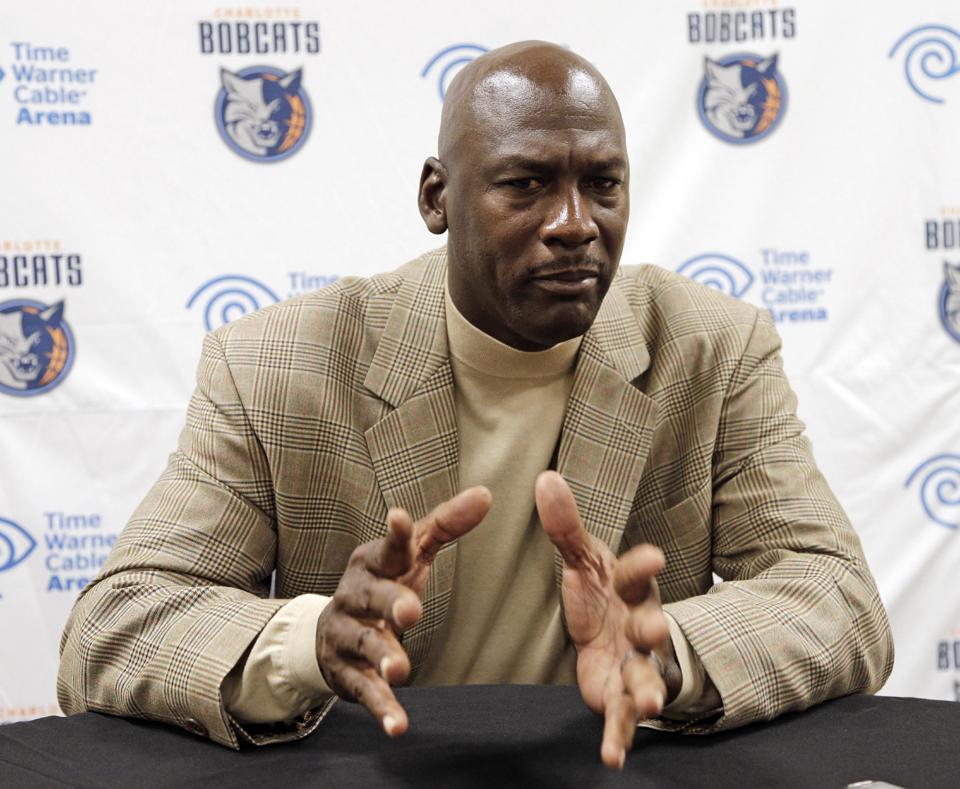 Charlotte Bobcats owner Michael Jordan talks about the progress his NBA basketball team is making during an interview with the The Associated Press, Friday, November 1, 2013, in Charlotte, NC. AP

The fiery 14-time All-Star who helped the Chicago Bulls to six NBA championships simply doesn’t have it in his makeup to intentionally lose games this season just so his Charlotte Bobcats can get a better draft pick next year.

Forget that the NBA would likely hand down a hefty fine and fans would probably boycott if a team admitted to doing that, the Bobcats owner said purposely losing games is just not part of his competitive DNA.

”I don’t know if some teams have thought of that. That’s not something that we would do,” Jordan told The Associated Press on Friday. ”I don’t believe in that.”

He then laughed heartily and said, ”If that was my intention I never would have paid (free agent) Al Jefferson $13 million a year.”

It’s not that the Bobcats couldn’t use a player like Andrew Wiggins at Kansas or Duke’s Jabari Parker – two college freshman who many view as potential NBA stars.

Jordan, 50, hasn’t been able to translate his on-court success to winning as an NBA owner and executive. The Bobcats are just 62-168 in his three full seasons as majority owner. They were 21-61 last season.

Still, he doesn’t believe there are shortcuts to winning.

While the 2014 NBA draft offers hopes to fledgling teams with a host of talented players, Jordan made it clear he isn’t thinking about losing.

”It’s not guaranteed (the player) you are going to get is going to be that star anyway,” Jordan said. ”I did read that certain teams are thinking about doing it. But I’m not one of them.

”So let’s alleviate that conversation.”

Jordan, relaxed and at ease at the Bobcats headquarters hours before his team’s regular season home opener, has been widely criticized for his failures with the Bobcats and for his struggles in the front office with the Washington Wizards.

He said some of that comes with the territory.

”It’s somewhat unfair, but you come to expect it,” said Jordan, who became the majority owner of the Bobcats in 2010. ”You set certain standards as a player that transcend whatever you do. It goes where you go. You will be wearing that around your neck so that when people see the name they expect the results.

”It’s somewhat unfair but it is what it is. I don’t let it define me.”

However, Jordan said he remains committed to the Bobcats and said he’s tried to be transparent with the fans about the direction of the team.

This past offseason he used the amnesty clause on forward Tyrus Thomas, a move that took his hefty contract off the books.

Jordan still has to pay Thomas $18 million, but the move freed up that money under the salary cap as part of a one-time policy under the new collective bargaining agreement. The Bobcats used that money to sign Jefferson to three-year $41 million contact and to re-sign guard Gerald Henderson for $18 million over three seasons.

”I mean, that was a statement,” Jordan said of his commitment to the Bobcats. ”I still have to pay more than $17 million, but it was a move that we needed to make to build and go get a guy like Big Al.”

Jordan also feels like he finally has the right man in charge in new coach Steve Clifford, a long-time NBA assistant who took over for Mike Dunlap, who was fired after one season.

”We’re focused on what we’re trying to do,” Jordan said. ”I think the direction we’re moving is positive. … It is baby steps. Every now and again you have a hiccup. But I must admit that we’re headed in the right direction and I’m very happy with that.”

The Bobcats, however, along with other small market NBA teams, are at a disadvantage with potential free agents like LeBron James, Carmelo Anthony and Chris Bosh – who all could be a part of the 2014 class.

The stars want to go ”where the lights are,” Jordan said.

He said last year he didn’t think the new CBA did enough to help level the playing field for small market teams in terms of helping them land – or keep – a high-profile difference maker in free agency.

A year later, after seeing the system at work, he has eased up on that stance.

”It’s better,” Jordan said. ”We are still going through and seeing the full effects of it. From a business standpoint if you operate your team in the right way it gives you a chance to break even or be profitable. And it makes it more difficult for your talent to get up and go somewhere else.

”You can provide more advantages than other teams to keep your player. It’s a fair assessment that if you get your star you can get parity within the league. I think parity is starting to happen within the league.”

Jordan doesn’t feel players orchestrating deals that land a trio of stars in big markets to form a ”big three” is necessarily good for the game.

”I’m not a big advocate for it,” Jordan said. ”I came from an era where it didn’t happen. If that happened to evolve from the draft, then you seemed pretty smart.”

Now he’s trying to make that happen in Charlotte.

Read Next
Michael Jordan says he’d be happy to sit down with LeBron James
EDITORS' PICK
Honolulu Café is the cure for your Egg Tarts and Roastings cravings
Luxe property: A way to build, preserve wealth
House energy committee chair Arroyo bats for cheap electricity
DOJ-led panel drops 29 cases of torture, EJKs
Duterte signs law giving rights, more protection to foundlings
Comelec won’t proclaim party-list groups yet
MOST READ
Heart Evangelista gets a ‘no’ from Chiz Escudero after asking, ‘Do I deserve a bag?’
Congress canvassing of votes for president, VP to begin May 24
Pahiyas Festival back but tourists greeted with austere celebration
Duterte signs law providing protection to consumers
Don't miss out on the latest news and information.