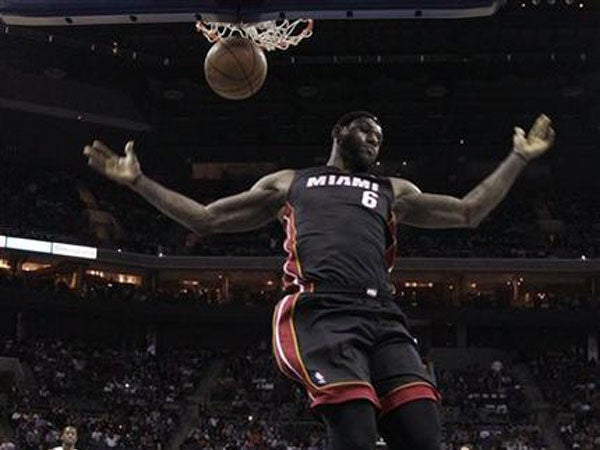 Miami Heat’s LeBron James (6) reacts after dunking against the Charlotte Bobcats during the first half of an NBA basketball game in Charlotte, N.C., Saturday, Nov. 16, 2013. AP

With Mario Chalmers suspended, Chris Bosh limited due to foul trouble, Ray Allen out with the flu and Dwyane Wade a non-factor, James came up big for the Heat. The four-time MVP was 13 of 18 from the field and had seven assists in his eighth 20-point game this season.

Michael Beasley added 15 points for the Heat, winners of six of their last seven overall.

Kemba Walker had 22 points to lead the Bobcats, who shot 35 percent from the field. Jeffery Taylor scored 14 points and has now finished in double digits in six of his last seven games.

The Bobcats had won two straight coming in, and stayed within 10 points for most of the fourth quarter but couldn’t get the lead.

Eventually, the Heat wore them down and the shooting struggles caught up with Bobcats.

James had 20 points in the first half on 8-of-11 shooting and Miami led by as many as 16. Only one of James’ first-half field goals came from outside of 10 feet as he did his damage driving and attacking the basket.

It’s a good thing for Miami that James was on his game early because the other parts of the big three struggled. Bosh had three fouls and no points in eight minutes, while Wade had three turnovers and was 1 of 5 from the field. Bosh would later pick up his fifth foul with 4:27 left in the third quarter and then got slapped with a technical foul after he took a seat on the bench.

A few seconds later, Heat coach Erik Spoelstra began chirping at the officials and he was given a technical foul, too.

Chalmers was serving a one-game suspension after being ejected from the Heat’s 110-104 victory over Dallas on Friday night. Chalmers was called for flagrant-2 foul with 5:01 remaining in the fourth quarter after referees ruled he intentionally swung an elbow at Dirk Nowitzki’s head as he tried to fight through screen.

Before the game Spoelstra said he “disagreed” with the NBA’s decision to suspend Chalmers.

“Mario doesn’t have a reputation as that type of player,” Spoelstra said. “We don’t have to agree with it. What we can do is agree to disagree.”

Chalmers can return for Tuesday night’s home game against Atlanta.