Roach-Ariza feud turns into a melee 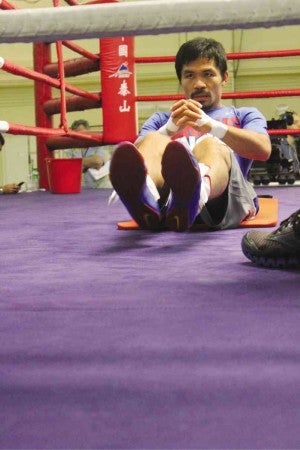 MANNY Pacquiao warms up before his training session. ROY LUARCA

Actually, it was Roach and opposing trainer Robert Garcia who had an altercation with regards to overlapping training schedule, but Ariza butted in and told Roach to get out.

Roach dared Ariza, whom he sacked from the Manny Pacquiao camp recently, to throw him out even as he was moving forward. That was when Ariza kicked Roach on the chest.

The scuffle, which was caught on video, also involved Donald Leary, a member of Team Rios who had to be restrained by security personnel from lunging at Roach—allegedly due to a racist remark that he was a stupid Mexican.

Apparently, Team Rios exceeded the time (9 to 11 a.m.) allotted them and Roach told Garcia to vacate the area as Pacquiao was arriving for training.

Garcia refused, saying they still had an interview with ESPN. This irked Roach, who cussed him.

Even as Roach’s party, that included conditioning coach Gavin McMillan, was leaving, the exchange of harsh words continued with Garcia yelling “F… you Roach. You don’t run this f…… place.”

Garcia, the 2012 Trainer of the Year, insisted that Roach insulted him and that he’d never disrespected the man.

Still fuming, Ariza, who moved over to the Rios camp after he got sacked, was overhead challenging Roach to a fight while pointing at the makeshift ring.

Roach later told Manila-based sportswriters that he didn’t regret what he said and that Ariza “kicked him like a girl.”

Roach harbors a grudge at Garcia and Rios after a video leaked out in 2010 in the buildup to the Pacquiao-Antonio Margarito showdown that showed Garcia, Rios and Margarito mocking the slurred speech and shaky movements of Roach, who has Parkinson’s disease.

That incident stuck in Roach’s mind, and he said the Pacquiao-Rios welterweight bout on Sunday is personal.

According to Roach, Team Garcia baited him into the incident.

“They wanted an altercation. They knew that it was past their time,” said Roach, noting that it was already 11:10 a.m. when he entered the room.

Renowned promoter Bob Arum said the fracas, though it generated excitement, was unfortunate and bad for the sport.

“The incident reinforces the people’s belief that there are hooligans in boxing,” said Arum, who said Garcia has agreed for Ariza not to be involved in prefight activities. Additional security personnel will also be deployed during functions leading to the bout.

Read Next
Lassiter, Lutz lead Petron Blaze win over GlobalPort
EDITORS' PICK
House energy committee chair Arroyo bats for cheap electricity
Unleash the photographer in you this World Photography Day with vivo smartphones
DOH says COVID-19 cases plateauing, but public shouldn’t be ‘complacent’
23,000 cops to be deployed nationwide for school reopening
Look Through: The fate of impounded stray dogs
What to watch out for when selecting a video surveillance solution
MOST READ
Solons file resolutions seeking probe on ABS-CBN, TV5 merger
Korina Sanchez reunites with former ABS-CBN co-anchors Julius Babao, Cheryl Cosim
Light therapy could be the answer to your sleep problems
Sharon Cuneta asks for prayers for friend in ICU who suffered silent stroke
Don't miss out on the latest news and information.