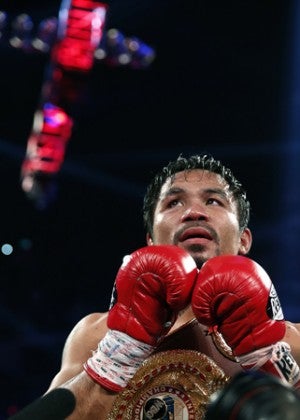 Manny Pacquiao from the Philippines wears the champion’s belt as he celebrates after winning his WBO international welterweight title fight against Brandon Rios of the United States, Sunday, Nov. 24, 2013, in Macau. AP

MACAU—Still springy on his feet and sneaky with his punches, Manny Pacquiao showed on Sunday he’s fighting career is far from over.

“This is still my time. My time isn’t over. I think I proved it today,” Pacquiao said during the postfight conference of the featured fight of “The Clash in Cotai” at Venetian Macao Sunday.

Pacquiao, who’s turning 35 on Dec. 17, dominated Rios throughout the 12-round welterweight bout to herald his comeback with a lopsided unanimous decision.

“God guided me to give more excitement to the fans,” said Pacquiao, who showed no ill-effects of the one-punch knockout he suffered at the hands of Juan Manuel Marquez last December in last Vegas. “He answered my prayer to rise again.

Pacquiao showed his supremacy by weaving in and out while peppering Rios with punches.

Pacquiao stressed, however, that Rios, although not clearly on his skills level, was a very tough hombre.

“Rios isn’t an easy opponent. It was one of my toughest fights ever,” said Pacquiao,  who again delivered his punches in bunches.

But while his boxing tools remained, Pacquiao’s killer instinct seemed to be wandering.

Roach was referring to one occasion in  the last round when Pacquiao touched gloves with Rios, indicating he’s no longer gunning for the knockout.

Admitting that he did ease up a bit, Pacquiao said there’s no point in pressing the attack with the win secured.

“Boxing is not (about) killing each other,” said Pacquiao. “It’s entertainment.”

Justifying his decision, Pacquiao said he was also being careful not to be caught by a killer shot again, the way Marquez nailed him with only a second to go in the sixth round last year.

“I wanted to show that I’ve recovered (from that knockout),” said Pacquiao, who’s guaranteed $18 million and stands to earn more if the pay-per-view reaches at least a million buys.

But even if it (sales) don’t meet expectations, Pacquiao can expect his next fight, set April 12 in Las Vegas, to be juicier.

Pacquiao, whose last stoppage came against Miguel Cotto, who was at ringside, way back in 2009, also had Antonio Margarito, Joshua Clottey and Shane Mosley for the taking, but didn’t go for the kill.