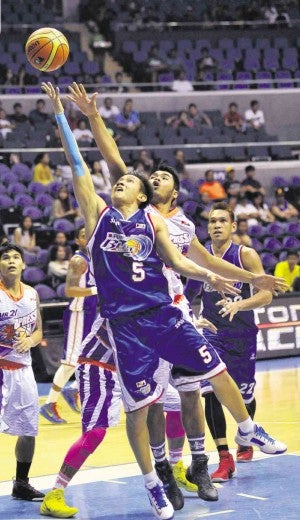 ALEX Cabagnot of Petron goes for a layup off Eric Camson of Air 21 in their PBA game last night at Smart Araneta Coliseum. AUGUST DELA CRUZ

Out of the first five games because of a foot injury, Alex Cabagnot made sure that the Petron Blaze streak wouldn’t end on his return.

The all-star point guard nailed the marginal shot on a running floater with 3.5 seconds left last night as Petron hacked out a 90-88 victory over Air21 that extended the Boosters’ winning run in the PLDT MyDSL Philippine Cup to six games at Smart Araneta Coliseum.

Cabagnot made the most out of a collapse in the Air21 defense inside the final 20 seconds, dribbling past a screen set up by June Mar Fajardo and getting free when Asi Taulava refused to help as the Boosters pulled out their closest win thus far.

“It’s going to be a big confidence boost for Alex, coming off a long layoff,” Petron coach Gee Abanilla later told reporters. “Air21 challenged us until the end, tons of credit to them.”

The Express, after snapping a five-game losing streak just last weekend, slipped to 1-6 and stayed in the cellar.

In the second game, Meralco used a strong fourth quarter to turn back San Mig Coffee, 72-64.

Cabagnot actually had two buzzer-beaters, the first a three-pointer at the half that forged a 39-all tie. He finished with 10 points and seven assists in his first 27 minutes of the young season.

Chris Lutz and Marcio Lassiter kept Petron in the thick of the fight, hitting timely shots that countered  baskets by Mac Cardona and KG Canaleta on the other end.

Canaleta hit two straight triples in a 20-second span, the last with 20.2 ticks left which forged the game’s last tie at 88.