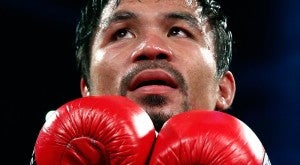 Pacquiao has a petition with the Court of Tax Appeals questioning the BIR’s assessment.

Pacquiao’s petition has been filed at the Tax Court in August last year. A warrant of distraint and levy has been issued by the Tax Court.

Under the Tax Code, a warrant of distraint and levy (WDL) is issued to enforce collection of the assessment of tax liability of a tax payer.

But at a hearing in December last year, the BIR agreed not to enforce the WDL due to existing negotiations between them and the BIR.

The hearing continued at the Tax Court with the submission of judicial affidavits of witnesses of both camps.

The tax court has yet to rule on the case.

Read Next
NLEX sets record winning-margin in ripping Zambales M-Builders
EDITORS' PICK
TNT brings Sarah G and Mimiyuuuh together for epic collab
Imee Marcos tests positive for COVID-19
Dengue cases in PH continue to swell: 92,343 as of July 23
House energy committee chair Arroyo bats for cheap electricity
‘Revolting’: 29,000 teachers left out after PS-DBM bought pricey, outdated laptops
SMDC all set for growth, prepared to face market resurgence
MOST READ
Raffy Tulfo blasts ‘killjoy’ critics of Angara’s birthday party: It’s for charity
Homeowners of BF Homes in Parañaque protest opening of 5 gates to public
Jaya, family safe after house burned down in US
Bongbong Marcos to PNP: Use of force must be reasonable, justifiable and only when necessary
Don't miss out on the latest news and information.