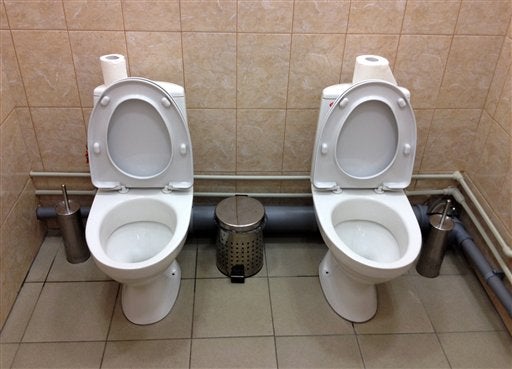 Side-by-side toilets in a men’s bathroom caused a social media sensation last month when they were discovered at the biathlon venue for the Sochi Olympics, swiftly becoming a national joke in Russia.

Now, another privy without privacy has been found — right under the noses of the media.

The Associated Press found the toilets built for two in a lavatory for female staff and volunteers conducting security checks of journalists at the new Main Media Center.

The Sochi organizing committee initially denied knowledge of the second twin toilet, and later refused to comment. That leaves unknown whether the loo-loo was built by design or resulted from an error during the plumbing process.

Unlike the biathlon center, which had only one toilet paper dispenser, the facilities at the media center have separate rolls for each user.

Read Next
Lady Bulldogs closer to 2x edge in semis after rout of Lady Warriors
EDITORS' PICK
China’s Xi unwilling to accept vaccines despite threat from protests — US intel
Easterlies to bring rain in PH on Sunday — Pagasa
Complete your early Christmas shopping with vivo V25 Series
What’s in a name? ‘Maharlika’ evokes time of mythmaking
The vivo Y16 makes the season of giving more thoughtful for the whole family
House energy committee chair Arroyo bats for cheap electricity
MOST READ
Maxene Magalona sees separation from Rob Mananquil as ‘blessing in disguise’: ‘There’s no more anger’
What’s in a name? ‘Maharlika’ evokes time of mythmaking
Are we ready for a sovereign wealth fund?
NBA: Warriors use 3-point barrage to ground Rockets
Don't miss out on the latest news and information.