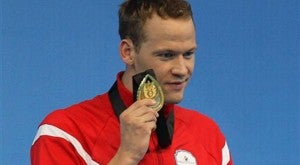 LAUSANNE, Switzerland  — Swimmer Mads Glasner has been reinstated as a world champion after winning his doping case appeal on Tuesday.

The 25-year-old from Denmark regained his 1,500-meter freestyle gold medal from the 2012 short-course world by proving that a mislabeled nasal inhaler caused his positive test for a banned stimulant.

Glasner was able to show that an American bottle of Vicks containing levmetamfetamine was covered with a label intended for the Danish market, where the brand does not contain the stimulant.

“Two very similar looking products but with different chemical compositions,” the court said. “However, he had in fact used the American product.”

CAS upheld Glasner’s request that FINA, which banned him for three months in 2013, publish a corrective news release.

Glasner had accepted his suspension and being disqualified from the bronze medal position in the 400 free raced in Istanbul two days before his gold-medal swim.

His doping control sample from the first race had traces of the banned substance but he raced clean in the 1,500.

The FINA release confirmed the 1,500 result that second-place finisher Gregorio Paltrinieri of Italy would return to silver medal position.