MANILA, Philippines—James Yap made his first two of three attempts from the 3-point area and it proved to be an indication of the kind of night he was going to have.

“My first shot went in, my second shot also went in,” said Yap in Filipino after putting a shooting display to help San Mig Coffee bundle out Ginebra in Game 7 of their semifinals series before a record-breaking crowd at the Smart Araneta Coliseum late Wednesday night.

“That’s just confidence. That’s basketball, you hit your first shot and your second shot, all of a sudden your confidence is high,” Yap, who turns 32 on Feb. 15, added.

But the night belonged to the only two-time MVP on the floor Yap, who also shared some of the limelight to his teammate PJ Simon. 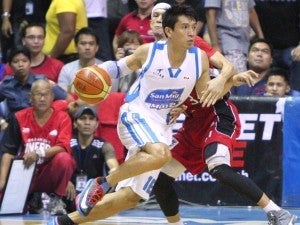 While Yap shot the lights out from downtown—making seven out of his 10 attempts—en route to a game-high 30 points, Simon did his damage in a variety of ways for a 28-point outing, most of which came in the fourth quarter,

“I got into a rhythm when I made my first shot. I also grabbed the opportunity because i was being guarded by a smaller defender,” Simon, who had 15 points in the final frame, said.

The versatile Simon made the most out of the mismatch as he obliterated Ginebra guard Jayjay Helterbrand in the fourth period where the Mixers put away the Kings for good.

Simon also said that having played in a Game 7 before made the difference with him starting the game relaxed while Yap added that he was also fortunate to have open looks.

“I’ve never seen a shooting performance like that by two players ever in my career,” marveled San Mig Coffee coach Tim Cone after his team clinched the last championship berth with a 110-87 win. “[With a] shooting like that, no one can beat us.”

With Yap and Simon making 22 of their 33 attempts, Ginebra didn’t even come close.

Read Next
San Mig Coffee’s Yap, Simon too much for Ginebra in Game 7
EDITORS' PICK
Labor groups slam planned importation of 450,000 MT sugar
Novak Djokovic crushes Tsitsipas to win 10th Australian Open
Things you can do with vivo Y02s’ upgraded 3GB+64GB storage
Viral phone HONOR X9a 5G launched at P16,990
House energy committee chair Arroyo bats for cheap electricity
Philippines to offer VAT refund to foreign tourists by 2024
MOST READ
Jaja Santiago acquiring Japanese citizenship, out for Philippine team–De Brito
Paolo Contis on real score with Yen Santos: What you see is what you get
Paolo Contis admits not giving financial support to his children: ‘I have my reasons’
NBA: Celtics earn controversial OT win over Lakers
Don't miss out on the latest news and information.