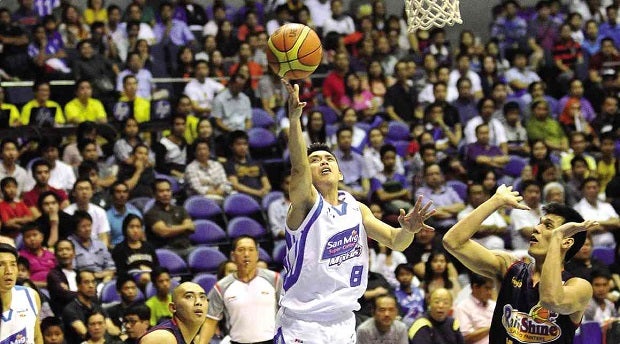 MANILA, Philippines — Executing better when the game was on the line, San Mig Coffee last night clipped Rain or Shine in another tight finish, 93-90, going 3-1 up Friday night in their PLDT MyDSL Philippine Cup title series at a packed Smart Araneta Coliseum.

There were several heroes for the Mixers, with the trio of Joe Devance, Mark Barroca and rookie Ian Sangalang standing out as they hit the telling blows and eventually gave San Mig three championship points.

San Mig has now won the last three games of the series with the last two being cliffhangers, counting a 77-76 Game 3 triumph just two nights before.

“You can’t pat yourself on the back,” San Mig coach Tim Cone said. “I know there’s a lot of talk about how few teams come back. But I was one of the few (coaches) that lost (a 3-1) lead. So we have to keep pushing.”

There have been three instances when 3-1 leads have been blown in a best-of-seven series, and Cone was on the opposite side in one of them, losing to the team he now coaches as Purefoods came back to pip Alaska to make the 2006 Philippine Cup Finals.

“It’s a tough loss, but we’re not giving this series up until it’s over,” said Rain or Shine’s Yeng Guiao. “We’ll come back Sunday and try to get back in this series.”

The first of the three chances that the Mixers have at wrapping this up will come at 4:30 p.m. tomorrow also at the Big Dome and if the Mixers go all the way, Cone will give the franchise its first back-to-back championships.

It will also be the first all-Filipino title for Cone since taking over San Mig two seasons ago and his 16th title overall, breaking his current tie with legendary Baby Dalupan and making him the winningest coach in PBA history.

The Mixers lost a 10-point halftime lead and trailed by seven at one stretch in the third period.

San Mig actually came into the fourth staring at a 70-76 deficit, but the Mixers never lost their poise despite blowing a commanding lead and losing Marc Pingris with still 4:59 left in the third.

Pingris, the lifeblood of San Mig’s defense, got an accidental poke in the right eye from JR Quiñahan in a rebound battle. Pingris never returned and was taken to the hospital.

“We won the battle but I hope we didn’t lose the war with Ping,” Cone said. “Losing Ping for a length of time will be a big blow for us.”

Earlier, June Mar Fajardo, the new Petron Blaze cornerstone seen by many as the best big man in the PBA, won his first Player of the Conference award by handily besting teammate Arwind Santos in simple rites honoring the best performers of the Philippine Cup.

The 6-foot-10 Fajardo, who topped the statistical points (SP) race, also over the reigning MVP Santos, garnered a total of 1,268 points as he won over everyone else in the media, player and league votes as well.