Pacquiao too strong, quick for sparmate 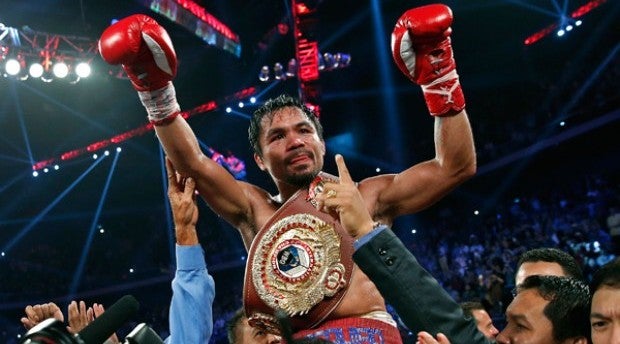 Manny Pacquiao from the Philippines wears the champion’s belt after defeating Brandon Rios of the United States in their WBO international welterweight title fight in Macau. AP FILE PHOTO

MANILA, Philippines — After three sparring sessions with Manny Pacquiao, Lydell Rhodes feels the $1,500 incentive offered by chief trainer Freddie Roach if he could knock  down the Filipino ring icon is beyond reach.

Pacquiao has proven to be  too strong and too fast for Rhodes, who needs to sneak in a power punch that could probably bring the Fighter of the Decade down to his knees.

Had the world’s only eight-division champion  wanted it,  Pacquiao could have easily knocked down Rhodes.

The disparity in skills was obvious in their third sparring session that lasted six rounds Saturday at Pacquiao’s Wild Card Gym in General Santos City.

Each time Rhodes went  on attack mode, Pacquiao would  just spun around and leave the unbeaten American (19-0, 9 KOs) in an awkward stance and open for a crunching shot.

Pacquiao, however, would  allow Rhodes to regain his balance before the Sarangani representative resumed his sparring session in preparation for his grudge rematch with Timothy Bradley on April 12 at MGM Grand in Las Vegas.

The coaching staff that also includes assistant trainer Buboy Fernandez is focusing on further honing Pacquiao’s left uppercut for the 12-round bout with Bradley, who wrested Pacquiao’s WBO welterweight crown via a widely criticized  split decision in late 2012.

In their first sparring session that went four rounds Tuesday, Pacquiao bloodied the nose of Rhodes, who’s is as tall and as bulky as the 5-foot-6 Bradley.

To keep Pacquiao from hitting peak form early, the next sparring session on Tuesday will also be for six rounds.

Team Pacquiao will leave for the United States on Saturday for the second and tougher phase of training camp at Roach’s Wild Card Gym in Hollywood.

There, Pacquiao will have new top-caliber sparring partners in Kendall Hoyt and Steve Formes.