V-League: No title hangover for Lady Eagles as they beat Lady Falcons 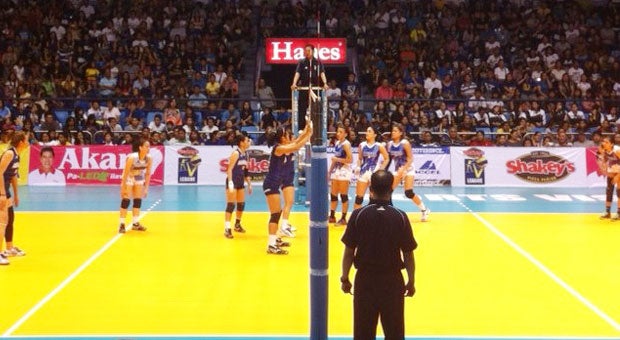 The Lady Eagles were still in fierce form even just a week removed from ending La Salle’s three-year reign in the UAAP as they showed the Lady Falcons that no lead was safe in the pivotal last two sets.

Ateneo came back from a 9-15 deficit in the third courtesy of a service ace-binge from New Zealand native Amy Ahomiro, who also nailed the hit that clinched the set, 25-23, and gave them a 2-1 lead.

They reprised the comeback in the fourth set when Adamson took the 18-14 lead as Valdez took over for the Lady Eagles and gave them the advantage, 20-19.

Though Adamson refused to go down just yet as Pineda scored on a off the block hit for a 23-22 lead, the Lady Eagles clinched the win with a 4-1 run.

Rookie Michelle Morente, who wounded up with 14 points, put Ateneo at match point before a hit from the high-leaping De Jesus sealed the victory for the Lady Eagles.

Valdez  finished with a game-best 23 points, while Ahomiro, who has been one of the key players for Ateneo in the past year,  had 16 points which included seven service winners for the Lady Eagles.

“I’m happy with the win,” said coach Parely Tupaz, who is taking over the coaching reins in lieu of Anusorn “Tai” Bundit who is back in Thailand.

The win also reasserted reastered Ateneo’s mastery of Adamson, whom it bundled out in the UAAP step-ladder final four.