Ghosts of Pacman’s rematches past 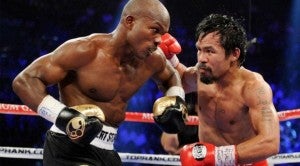 MANILA, Philippines—Boxing’s greatest fighters always had those great rivalries and series. For eight-division World Champion Manny Pacquiao he had three, and a fourth one coming.

Pacquiao is on a path of vindication and redemption after upstart Timothy Bradley took his World Boxing Organization Welterweight Title in controversial decision and has the chance on Sunday to take back the red-and-gold belt.

Surprisingly, all of Pacquiao’s rematches were against Mexicans which brought forth one of his most endearing nicknames that ushered in the Pacman era, the “Mexicutioner.”

Of all his rematches, the second fight after the first, the Filipino boxer won all three.

History has been on the side of arguably the greatest Filipino fighter of all time. And if this trend continues to hold true, Pacquiao could take back the title that once sat in his trophy case.

Start of his legacy

Before Pacquiao made world history as the only eight-division World Champion, he was a Filipino upstart looking to etch his name in the boxing annals.

In only his fifth fight in American soil, Pacquiao walked into the ring as the challenger, and probably the underdog, and had to match up against one Mexican icon, Marco Antonio Barrera.

Pacquiao, the up and coming Filipino no-nickname for Michael Buffer to immortalize, had to prove to the world that he deserved a title shot against one of the world’s best pound-for-pound fighters of that time at the Alamodome on November 15, 2003.

And he did not disappoint.

From the opening bell, the upstart Pacquiao rained a flurry of punches on Barrera.

Pacquiao, continuing the offensive onslaught, floored Barrera on the 55-second mark of the 11th round then with the Barrera corner, looking at their prized fighter turn into a walking punching bag, waved the towel to hand the Filipino The Ring Featherweight title.

Barrera would take another crack at Pacquiao, now a bona fide boxing superstar, on October 6, 2007, this time at the mecca of boxing, Las Vegas, Nevada.

It would prove to be a one-sided affair as Pacquiao dominated his Mexican foe who was only in it to survive 12 rounds of brutal punishment from the Mexicutioner at the Mandalay Bay.

Barrera and Pacquiao would never face each other on the ring again, though the once-felled Mexican has been an ardent supporter of the Filipino fighter ever since.

Riding on a nearly 15-year unbeaten streak, Pacquiao walked to the MGM Grand ring on March 19, 2005 to face one of Mexico’s greatest champions, Erik “El Terrible” Morales then, just as Pacquiao at the time, a three-time World champion

On a fight that went to an epic 12-round action, Morales staved-off a knockout-hungry Pacquiao to win via unanimous decision with all judges scoring in favor of the Mexican 115-113.

Fast forward to January 21, 2006, less than a year after the first match, both fighters were at it again with Pacquiao fresh from a TKO victory over another Mexican, Hector Velasquez, winning the vacant WBC International Super Featherweight title.

On the other corner, Morales lost to American Zahir Raheem via unanimous decision for the vacant WBC International Lightweight title.

Meeting on the same weight class as the previous fight, Pacquiao proved to the thousands inside the Thomas and Mack Center why he was nicknamed the Mexicutioner.

Throwing a flurry of punches and going on a blitzkrieg to the tune of “Manny!,” Pacquiao knocked Morales down with 53 seconds remaining in the 10th round and dispatching El Terrible in the 28 second mark with referee Kenny Bayless declaring a TKO and retaining the WBC International Super Featherweight title in the process.

In the same year, after a virtual no-contest decision against Oscar Larios in the Philippines, Pacquiao and Morales were at it again, and the Pacman was hell-bent to finish the trilogy in convincing fashion.

Thomas and Mack Center was again the ampitheater of the two gladiators on November 18, 2006, with Pacquiao walking to the ring as the champion.
On the fateful third round, Pacquiao knocked down Morales with a solid left then, after a futile attempt of a comeback from Morales, knocked the Mexican out with another left straight to the kisser on the 14-second mark.

Morales, seeing no hope, just shook his head in submission as Pacquiao celebrated the end of the trilogy.

No other fighter may have Pacquiao’s number memorized than The Dynamite, Juan Manuel Marquez.

Marquez and Pacquiao featured in not just a rematch, but a saga of four fights.

Both are relentless fighters with different fighting styles.

Pacquiao was the aggressive, free-willing slugger who would fight Morales, the calculating, tactical counter-puncher on May 8, 2004 at the MGM Grand in Las Vegas, Nevada for a massive unification bout for The Ring Featherweight, World Boxing Association Super Feather Weight, and International Boxing Federation Super Featherweight titles.

On their first match, the Pacman showed why he was one of the best fighters in the world diffusing the Dynamite with three knock downs just in the first round.

On the mercy of the Pacman from the start of the second round, Marquez used his superior counter-punching ability to stay in the match and give Pacquiao a run for his money.

With both fighters pouring their hearts out and convinced that they gave all that was needed to win, raised their arms as after the final bell in celebration.

What happened after the celebration would later become the catalyst to more to come as the fight was declared as a draw with two coaches scoring the bout 115-110 apiece for each fighter and another 113-113.

Judge Burt Clements, the lone judge that scored a draw, was later revealed to have wrongly scored the first round, wherein Pacquiao knocked Marquez down three times, 10-7 instead of a 10-6.

Had Clements scored the round perfectly, Pacquiao would have won via majority decision, and probably the Pacquiao-Marquez saga could have been just a trilogy or probably just a rematch.

“I just screwed up. I feel badly because I dropped the ball, plainly and simply,” Clements was quoted in the New York Times. “You can make a lot of arguments that it was a very close fight, but that’s immaterial. The fact is I dropped the ball.”

To correct the judge’s blunder on their first fight, the Pacman and the Dynamite would once again duke it out on March 15, 2008, nearly four years after their controversial draw, at the Mandalay Bay in Las Vegas.

As the storybooks would have it, Pacquiao knocked Marquez down once again, this time in the later 10th round, with a devastating left straight.

But staying true to storybook fashion, Marquez stood up to what turned out to be a classic.

Back and forth, both fighters swung trying to knock each other out, Pacquiao nearly scored a knock down in the 11th after a flurry of combinations that pinned Marquez at the ropes near the end of the round.

To end a speculation to the controversy, the third instalment of the Pacquiao-Marquez was scheduled to happen three years later on November 12, 2011.

Expecting a charm, or an end, in the third fight is of false hope.

At a jam-packed MGM Grand in Las Vegas, the two fighters once again climbed the ring, this time on a different weight division, a catch-weight at 144 pounds of the welterweight division.

For the first time, Pacquiao was the champion and Marquez was on a mission to take away the Pacman’s WBO Welterweight title.

For all the hype leading into the fight, it proved to be futile as the third instalment was, arguably, the weakest of three fights as it became witness to the decline of the Pacman.

It was a far cry from the two previous fights which saw both fighters exchange blows in furious fashion.

In a technical and calculated fight, Pacquiao was a shell of his younger self with Marquez looking for pinpoint punches with his counter-punching style.

Pacquiao, once again, won in a controversial majority decision, 115-113, 116-12, 114-114, prompting Marquez to question the judges’ scorecard and opening the door toanother fight that could possibly conclude the series.

To silence the ghosts of the previous hallow fights, a fourth fight was scheduled and on December 8, 2012, the fight that shocked a country was in place.

Pacquiao was once again embroiled in a controversy. He just got off a shocking decision defeat from Bradley and losing his WBO Welterweight title.

Marquez, on the other corner, won against Serhiy Fedchenko from Ukraine to claim the Interim WBO Light Welterweight title.

The two once again met at the welterweight division in an expected slugfest.

Without an official title at stake, WBC put on the line a Champion of the Decade title.

Both fighters looked to put an end to the controversial three fights with Morales the first to score a knock down flooring Pacquiao in the third round.

Pacquiao retaliated in the fifth, knocking down the Mexican with a trademark left.

Of all the punches thrown, only a single punch punctuated the saga, a clean right to chin just a second before the end of the sixth. Pacquiao had lost.

Pacquiao has been on both corners of the rematches he has been a part of. He has been victorious. He has been frustrated. He has had a 5-1 win-loss record in his rematches. On Sunday, Pacquiao and the rest of the world will find out if history is indeed on his side.

Brownouts may frustrate some of Pacquaio’s fans in Mindanao