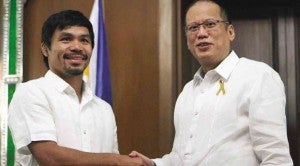 The President’s schedule sent to media on Sunday afternoon showed that Pacquiao’s courtesy call is scheduled for 1 p.m. on April 21.

Palace spokespersons earlier said the meeting was already being arranged and will be set based on the schedule and at the convenience of both parties.

Right after Pacquiao’s fight against Timothy Bradley in Las Vegas, Communications Secretary Herminio Coloma, in behalf of the President, congratulated the boxer for his “magnificent triumph.” Pacquiao was also called a “national treasure” for his prowess in the sport.

The boxing icon came home to the Philippines on Friday.