NBA: Pacers defeat Hawks, to meet Wizards in round two 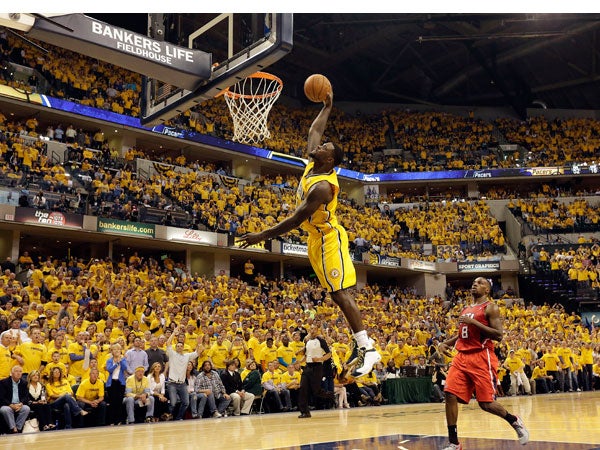 Indiana Pacers guard Lance Stephenson, left, goes up for a breakaway dunk in front of Atlanta Hawks guard Shelvin Mack (8) in the second half during Game 7 of a first-round NBA basketball playoff series in Indianapolis, Saturday, May 3, 2014. The Pacers won 92-80. AP

The Pacers, who had the best record in the Eastern Conference to claim a home-court edge all the way into the NBA Finals, had to win the last two games of their best-of-seven series to advance 4-3 over the only team in the playoffs with a losing regular-season record.

Indiana, which pushed Miami to seven games in last year’s East finals before losing, will face the Washington Wizards in the second round.

“This was a long series,” George said. “We’re happy to get over this hump and get ready for the next task, which is preparing for the Wizards.

“We’re ready for those guys. This is going to be just as tough a matchup.

“We have to put this one to rest. We’re happy to continue on our journey but we have to get ready and get the first one.”

George set a career playoff high in points and also grabbed 11 rebounds while Lance Stephenson added 19 points and 15 rebounds for Indiana. Roy Hibbert and George Hill each had 13 points for the Pacers, who also had 12 rebounds from David West.

“I felt I had a hot hand,” George said. “Once my mid-range started to go, I really felt confident coming off screens and shooting the ball.”

Long-range sharpshooter Kyle Korver led Atlanta with 19 points on a night when the Hawks set an NBA playoff game record with 44 3-point attempts, but connected on only 11 shots from behind the arc.

“We know how to execute. We have to learn to win. That’s the next step for us,” Korver said. “We will look back on a couple of games in this series that we could have won.”

Atlanta failed to become the sixth bottom seed to topple a top seed in the first round of the NBA playoffs. The Pacers’ back-to-back wins in games six and seven were the only such wins in the series.

George scored 16 points in the first half while Hibbert added nine for the Pacers, who went on an 18-4 run to pull ahead 47-36 at half-time.

“At some point something had to give with them having legs to make jumpers,” George said. “We grinded them down so much in this series that in game seven those jumpers weren’t falling for them.”

The Pacers stayed on top throughout the second half, denying a late charge from the Hawks to seal the series.

The game was the first of a record five game sevens in the opening round of the NBA playoffs. The total already matches the league record for the most seventh games in all rounds in any playoff year.