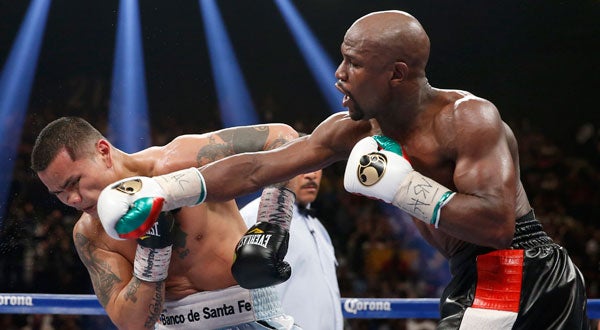 Floyd Mayweather Jr., right, connects with a right to the head of Marcos Maidana, from Argentina, in their WBC-WBA welterweight title boxing fight Saturday, May 3, 2014, in Las Vegas. AP

LAS VEGAS — Floyd Mayweather won a 12-round majority decision over Marcos Maidana on Saturday to run his perfect record to 46-0 in a welterweight world title unification bout.

The 37-year-old American Mayweather retained his World Boxing Council world title and took Maidana’s World Boxing Association belt, winning the fight on two of the three judges’ scorecards with the third scoring it a draw.

Mayweather did not get the decisive victory that so many had predicted as the more aggressive Maidana gave him all he could handle.

Argentina’s hard-punching Maidana, who was making the first defence of his title, suffered the fourth loss of his career to go with 35 victories.

Most of Mayweather’s recent fights have been boring tactical affairs, but Maidana’s relentless pursuit of the unbeaten champion and willingness to go toe-to-toe made for an exciting bout.

Many in the crowd thought Maidana had done enough to win the fight as his supporters in the arena booed the decision then tried to drown out Mayweather’s post-fight interview.

Mayweather made a grand entrance befitting his superstar status. He was accompanied into the ring by pop star Justin Bieber and rapper Lil Wayne.

The first few rounds were electric as Maidana stuck to his pre-fight promise to come out swinging. Mayweather seemed to be content to lean on the ropes and absorb the overhand rights that got the crowd excited but appeared to do little damage early on.

Mayweather suffered a cut over his right eye in the fourth round from an accidental head butt.

Both fighters resorted to some questionable moves later in the fight.

Maidana hit Mayweather with a low blow in the eighth and later in the round Mayweather tried to surprise Maidana with a ghost punch while the Argentinian was trying to communicate with the referee about something Mayweather was doing that he didn’t like.

In the 11th, Maidana pushed Mayweather partly through the ropes then threw more punches while Mayweather was leaning over backwards almost falling out of the ring.

Maidana landed a total of 221 punches — more than Canelo Alvarez or any of Mayweather’s other recent opponents.