Thunder’s Ibaka may be available vs Spurs 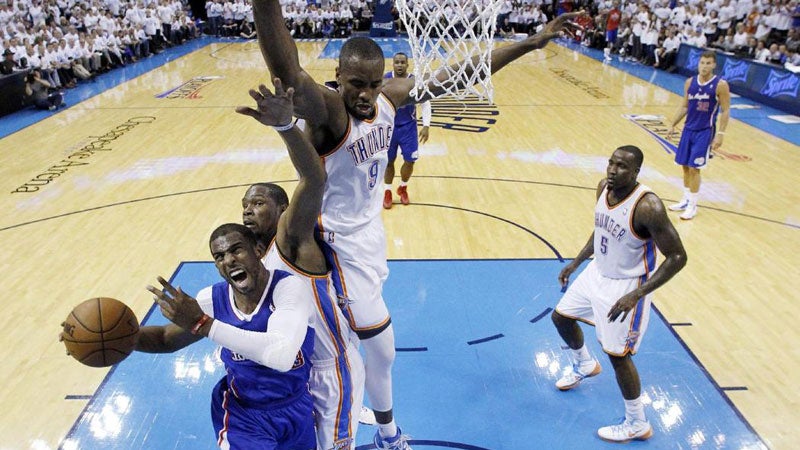 OKLAHOMA CITY — The San Antonio Spurs never believed Serge Ibaka was out for the Western Conference finals, even after the Thunder said they expected him to miss the rest of the playoffs with a calf injury.

Looks like the Spurs might have been on to something. The Thunder said Friday that their defensive standout now is day-to-day after his strained left calf showed improved movement and stability and a significant decrease in swelling. The Thunder have missed Ibaka badly as San Antonio has raced to a 2-0 lead in the series, and his possible return gives the Thunder hope as they prepare for Game 3 on Sunday in Oklahoma City.

”His progress in the last several days has been surprising,” Thunder general manager Sam Presti said. ”I don’t think any of us thought we’d be standing here talking about this. We’re grateful that we are.”

Well, maybe no one with the Thunder expected it. The Spurs certainly did.

”We knew he would be back, and that’s good,” Spurs coach Gregg Popovich said. ”Nobody would wish that on anybody to miss a playoff. We’ve had guys miss playoffs before. It’s obviously a downer. If he gets back in – and I’m sure he will, as I’ve said from the beginning – I think it’s great.”

Ibaka was injured in Game 6 against the Los Angeles Clippers, a Western Conference semifinals series-clinching win on May 15. He is averaging 12.2 points, 7.3 rebounds and 2.2 blocks in the playoffs while shooting 62 percent from the field.

Presti did not say if Ibaka would be available for Game 3, just that he could not be ruled out. Presti said he felt it best to be forthcoming with the change in the situation.

”It would be convenient to not provide the information, and if he were ever healthy enough to play in a game, to release that an hour before the game,” he said. ”But in this case, we don’t think that was the way to handle it, because previously, we had deemed him out. And we can’t deem him out.”

Ibaka also provides balance for Oklahoma City’s offense with his mid-range jumper and an ability to finish close to the hoop when defenses focus on Kevin Durant and Russell Westbrook. ”Big difference,” Spurs guard Danny Green said. ”Obviously, one of the best defensive players in the league. Alters everything around the basket, rebounds, and also, of course, he can knock down shots. So you’ve got to respect him. Hopefully, if he does come back he’s not as fresh, he’s a little rusty.”

San Antonio said it will not make adjustments based on the news.

”We’re going to try to do the same thing,” Spurs guard Manu Ginobili said. ”It’s not like we’re going to change the game plan for him. For sure, he’s going to give them another big body that can be a presence in the paint, block shots and make some jumpers, but our idea will be the same.”

Presti said Oklahoma City’s medical staff would like to see Ibaka go through game-like conditions before allowing him to return. So far, he has done low-impact training – light drills and light shooting. Conditioning could be an issue and even if he returns it’s unclear how much he would play.

”We’re still focusing on trying to beat the Spurs without him playing,” Thunder coach Scott Brooks said. ”That has not changed. I know he’s listed as day-to-day, but he is out until I’m told differently.”

Thunder center Kendrick Perkins said Ibaka could not have erased all the defensive mistakes the Thunder made in Game 2. The Spurs shot 50 percent from the field and made 9 of 23 3-pointers.

”He’s a key guy, but at the end of the day, we shouldn’t be getting beat this bad,” Perkins said. ”In my opinion, even if we would have Serge the last game, the way we played, we still would have lost.”