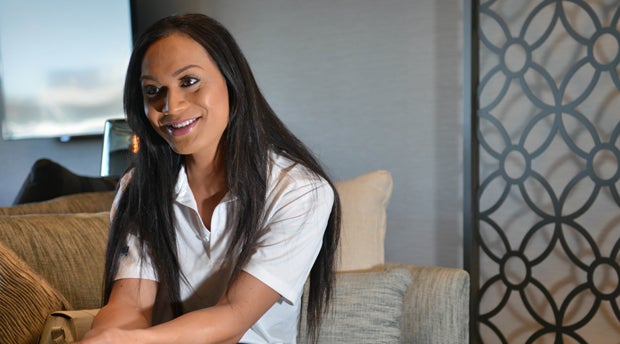 This photo taken on June 7, 2014 shows American Samoa international Jaiyah Saelua, the “world’s first” professional transgender football player, talking to AFP during a visit to Sydney. Saelua may be nearing the end of her football career, but says she has more to achieve as the sport celebrates the World Cup in Brazil. The striking 6ft 1ins (1.83m) centre-back, who was born John Saelua, plans to quit the game after 2015, but hopes to remain involved in efforts to combat discrimination and homophobia in the sport. AFP

SYDNEY – Jaiyah Saelua may be nearing the end of her football career, but the ‘world’s first’ transgender professional player says she has more to achieve as the sport celebrates the World Cup in Brazil.

The striking 6ft 1ins (1.83 meters) center-back, who was born John Saelua, plans to quit the game after 2015, but hopes to remain involved in efforts to combat discrimination and homophobia in the sport.

“Just to get the message across that soccer should be a sport for everyone,” the American Samoa international told AFP during a visit to Sydney.

Saelua, first selected for American Samoa at the age of 14, says she “runs like a girl” and never considered her gender an issue. “Girls can be fast too,” she said.

The 25-year-old, who is known for her tough, physical tackles, wasn’t even aware she was the first transgender player – as recognized by FIFA – to play in a men’s international match before she did so.

“I didn’t know the significance it had on the world because in Polynesian culture it’s not that big of an issue.

“And I assumed that a lot more trans-people in the Pacific region were playing international football. I haven’t met any in my career but I was so sure that there has been (some) before me.”

‘Way of the woman’

Saelua is one of Polynesia’s “fa’afafine”, a tradition which means “way of the woman” and allows males to choose to be brought up as females.

The deep acceptance of Saelua by her American Samoa teammates is seen in a documentary released earlier this year about the side’s battle to overcome its reputation as the world’s worst football team, having suffered a record 31-0 defeat at the hands of Australia in 2001.

“Next Goal Wins” shows her dancing in a dress and straightening her long, chestnut hair in the changing room.

Saelua says other teams are also accepting, but occasionally resort to name-calling. “Never works, makes me play harder,” she said with a laugh.

It wasn’t until she tried out for the men’s football team in college in Hawaii at the age of 22 that Saelua was treated differently.

“At the warm-up for the try-outs the coach pulled me aside and said that he didn’t want to put his team in an uncomfortable position,” she said.

“And I knew that was my cue to leave. So I only spent 10 minutes during the warm-up and I didn’t even get to show how good a player I was.”

She says she would deal with the experience differently today.

“I probably would take matters more seriously, because it is an issue worldwide. And even at the college level it should be dealt with.”

Instrumental in American Samoa’s first ever win –a victory against Tonga in 2011 in a preliminary World Cup qualifier- Saelua is taking her role seriously and delayed her initial plans for gender transition in order to remain on the pitch and inspire others.

“I was sure in 2011 that when the (World Cup qualifying) was over I would give it up and start my transition, but… we were doing well,” she said of the team that failed to qualify for the tournament in Brazil.

“And I didn’t want to give the message to other trans athletes or potential trans athletes (that they would) not be able to see me again playing after 2011.”

But 2015 will be Saelua’s last year playing with the team she has helped rebuild.

“There are no rules against it but as a personal decision … for me, because I tackle tough … it’s risky for me,” she said of the surgeries, adding that she needs the testosterone to “play tough”.

“I feel like I am not getting younger and the older I get, the harder it will be to transition.”

Transgender issues are reaching political agendas around the world, with India’s highest court ruling in April that a person can be legally recognised as gender-neutral.

Australia’s highest court has also acknowledged the existence of a third “non-specific” gender that is neither male nor female, while its top sports, including all football codes, came together this year in support of stamping out discrimination and homophobia.

Saelua is hopeful of continuing her role as a fighter for acceptance off the pitch.

“(FIFA president) Sepp Blatter wrote me a letter in 2011 recognising me as the first transgender… he mentioned that he has a team of athletes that he put together to fight discrimination in any way.”

She hopes that American Samoan officials can reach Blatter to find a way for her to appear at the World Cup in Brazil as an ambassador against homophobia.

“I think this is our time, for transgender people,” she said.