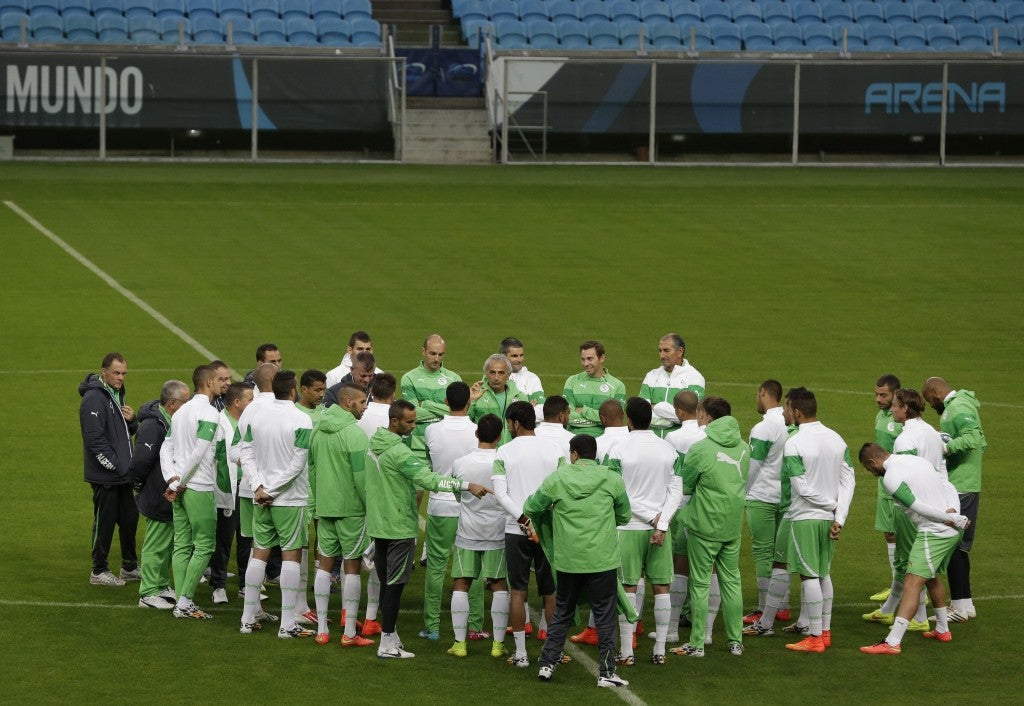 Algeria’s players listen their coach Vahid Halilhodzic during a training session at the Arena do Gremio in Porto Alegre, Brazil, Sunday, June 29, 2014. Algeria will play against Germany on Monday in the round of 16 of the soccer World Cup. AP

PARIS – Authorities in France tightened security and appealed for calm on Monday ahead of a World Cup match between Germany and Algeria following riots after the last two Algerian fixtures.

Algeria’s historic qualification for the second round of the football World Cup on Thursday turned violent in some French cities, leading to the arrests of more than 70 people for rioting and looting.

That was more than double the 30-odd arrested on June 22 after Algeria’s win over South Korea.

The rioting prompted far-right leader Marine Le Pen to call for dual nationality to be revoked in France on the ground that France’s immigration policies had failed.

“We are asking everyone to stay calm while celebrating a victory,” said Harlem Desir, the French Secretary of State of European Affairs, on Monday.

“We must not let unruliness spoil what should be a party,” he told LCI private television channel, adding that adequate security measures had been put in place to pre-empt a repetition of the past violence.

Desir slammed Le Pen’s comments as an “attempt to play one off against the other,” and said the trouble-makers were a minority and not representative of the community.

“I would like to see that we do not mix up little groups and the majority who conduct themselves in a peaceful manner,” he said.

Hundreds of police to be deployed

More than 500 police will be deployed in the eastern city of Lyon ahead of the Algeria-Germany match on Monday evening, the head of security for the region, Albert Doutre, said.

Germany lost their two previous matches against Algeria — 2-1 at the 1982 World Cup and 2-0 in a 1964 friendly. The winner of Monday’s game will play France or Nigeria in the quarter-finals in Rio de Janeiro on Friday.