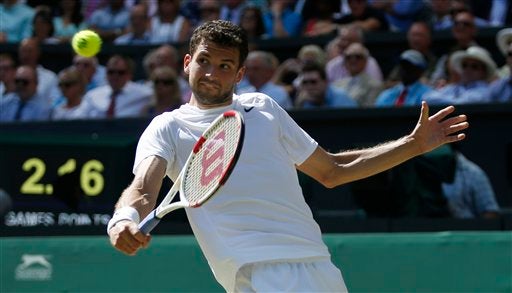 Grigor Dimitrov of Bulgaria plays a return to Novak Djokovic of Serbia during their men’s singles semifinal match at the All England Lawn Tennis Championships in Wimbledon, London, Friday, July 4, 2014. AP

The top-seeded Djokovic overcame the loss of five straight games in the second set, seized control with a more aggressive game and took advantage of a slew of double faults by Dimitrov — including three in a row in the third game of the final set and one in the final tiebreaker.

Djokovic, the 2011 champion and runner-up last year, advanced to his 14th Grand Slam final — and 10th in his last 13 majors.

He will face the winner of the other semifinal between seven-time champion Roger Federer and big-serving Canadian Milos Raonic.

The 11th-seeded Dimitrov came in with a 10-match winning streak.