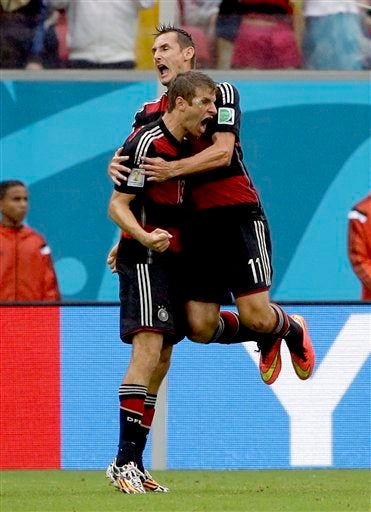 BELO HORIZONTE, Brazil—Miroslav Klose has broken the World Cup scoring record after netting a goal for Germany against Brazil in Tuesday’s semifinal in Belo Horizonte.

Klose put Germany ahead 2-0 in the 23rd minute for his 16th career World Cup goal in his fourth tournament. It broke the mark of 15 goals he shared with Brazil’s retired star Ronaldo.

The 36-year-old Lazio striker also scored in Germany’s 2-2 draw with Ghana in a group match when he came off the bench to get Germany back into the contest.

With 71 goals in 136 matches, Klose is Germany’s all-time top scorer, having beaten the record previously held by Gerd Mueller.

Germany was up 5-0 after just 30 minutes of Tuesday’s game.