MANILA, Philippines – Indeed, the Clear Dream Match 3 hype does not end in its final game.

In July 5, Clear brought together the Younghusband brothers and their respective teams’ Top 11 voters in a meet and greet.

The Top 6 amateur Filipino football players selected and coached by the Manchester United Soccer Schools were also part of the post-game treat. Instead of a simple “Hi,” “Hello,” “Can I take a picture with you?” setup, the fans invited to the Clear Fan Lunch were privileged to share an entire lunch with the Younghusband brothers.

A total of 8 fans made it to the event.

When the fans arrived in the “meeting room,” the Younghusband brothers transferred from their management team’s table to the other that bridged their efforts of reaching out to their fans and vice versa.

The fans were at first shy to shoot questions. Consequently, James and Phil opened the floor by sharing stories from their recent trip to Brazil (for the 2014 FIFA World Cup) as well as their experiences of playing in Singapore.

After a course or two, the privileged fans were then able to loosen up and talk normally with their idols.

One asked how were the girls in Brazil, which earned an instant “How old are you?” response from Phil, followed by a chuckle. And another was curious whether the Younghusbands watch Koreanovelas or not.

James answered they do know the prominent Bench endorser Lee Minho, but the boys shared that they are more into movies.

When asked what other sport would they explore when not playing football, James answered it is chess for him and for Phil, tennis.

James also revealed that they invest in training young footballers during their spare time. Once they retire from playing professional football, the brothers are looking into coaching the country’s younger generation of football players.

Currently, James still has 10 years of professional football up his sleeves while Phil has 11.

Before the lunch wrapped up, the brothers wanted to make each fan perform, to showcase even just a little of their talent. But due to time constraints, only the distinguished professional footballers were able to do so.

James playfully sang lines from the classic Frankie Valli track “Can’t Take My Eyes Off You,” then right after performing, he urged his younger brother to hit “I Want it that Way” by the ‘90s boyband, Backstreet Boys.

The boys and the fans officially ended the lunch meet and greet with a photo op. 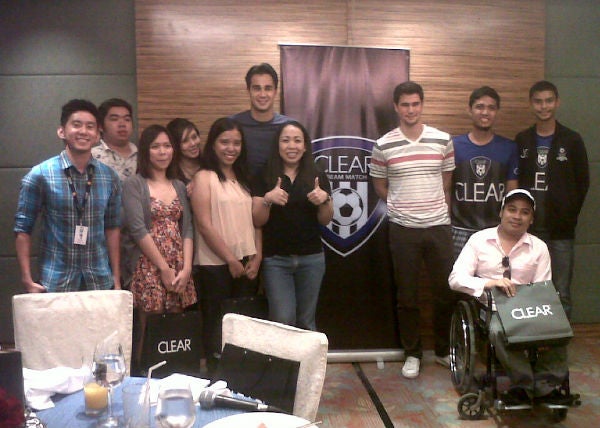 To many, the Clear Dream Match voting may have seemed like a normal virtual competition. But to Claudine Ulita and Fran Ressureccion, it weighs heavier than that.

Before the fan lunch started, this writer learned that Ulita and Ressureccion only met through the Clear Dream Match 2 and became friends later on. This story, which was eventually shared during the fan lunch, delighted the Younghusband brothers.

Jobert Enamno on the other hand confessed to INQUIRER.net that he even set a daily reminder on his phone just to make sure he contributes votes to his favoured team.

A stronger testament to Enamno’s fondness of the footballers was his determination to attend the event despite his condition. Enamno went to the venue by himself.

Alfred Barretto and Nicole Tono also made it to Top 11 after contributing a significant amount of votes to their favorite team, and the same went for Evan Martin Mercado who asked the most number of football-related questions during the lunch. The only amateur footballer who made it to the event was Jarvey Gayoso, an incoming senior high school student at the Ateneo de Manila University.

Gayoso, 17, was among the select 6 players who were privileged to train with the Manchester United Soccer Schools coaches.

When asked how his experience with the British team went, Gayoso said that it was life-changing and inspiring. His drive to champion the sport spiked harder as the three-day training helped him realize how fun and challenging it is to play with fellow amateurs with great potential.

Though the Clear Dream Match 3 has officially ended, Clear Assistant Brand Manager Martin Tee says, “Definitely we’ll still be supporting the budding [of] the young players that we have and it will be our ongoing advocacy to help these young players to be the best that they can be in terms of football.”

When asked what’s next in line for Clear and its endeavours for the football scene in the country, Tee answered, “We’ll still be doing the clinics and the workshops where we’ll be inviting coaches to train our young footballers.”

But whether there will be a fourth installment for the massively supported Clear Dream Match starring the Younghusband brothers, Tee answered, “We’ll see.” He expounded by saying that there’s still a long way to go as the Clear Dream Match 3 has just concluded.

Tee also said that whether it will be another Clear Dream Match or a new activity, people can expect that Clear is continuously cooking something which both old and new supporters can look forward to.

Both James and Phil expressed how thankful they were for being part of the Clear Dream Match games. According to Phil, they received messages from their English friends telling them how lucky they were to play with football legends Andy Cole and Paul Scholes.

The Younghusband brothers also extended their gratitude to their respective teams which took the games to heart and gave it their all.

“There wasn’t a single player to disappoint, I was very proud of all my players,” says James.

“Every player, you can’t pick out one who didn’t show a good attitude and I think that’s the most important thing in these events,” added Phil.

And when asked what they would like to tell their fans,

James: Thank you to everyone who supported Team James and Team Phil, for making this event possible. Without these guys, I don’t think the game would have been as intense.

Phil: See James and I are very very thankful for this opportunity. [And] The last three games of the Clear Dream Match have been an amazing experience and all three of them have been highlights in our careers, so we’re very thankful. And the fans were unbelievable, the amount of hard work, and dedication, and discipline they actually showed, [I mean] all the voting, all the things they go through, they’re competitive against each other – oh it’s amazing.

Throughout the three-hour fan lunch, the brothers never failed in emphasizing how none of their amazing experiences would have been possible without the support of their fans.

The Fan Lunch with the Younghusbands was powered by Clear.