All show, no play: ‘We never said there was a game’ | Inquirer Sports
Close
menu
search

All show, no play: ‘We never said there was a game’ 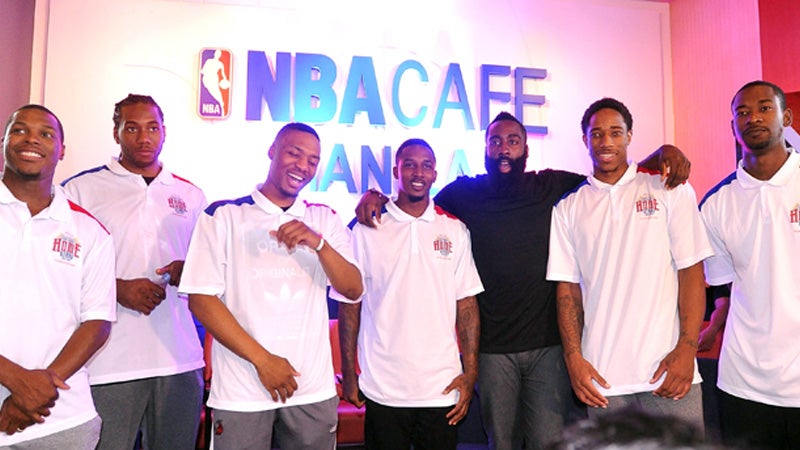 (From left to right) Kyle Lowry , Kawhi Leonard , Damian Lillard , Brandon Jennings,James Harden, Demar Derozan and Terrence Ross at the NBA Cafe in SM Aura during a press conference on July 21, 2014. What was initially scheduled as a match between the Gilas Pilipinas basketball squad and a group of NBA All Stars turned into a glorified training camp after the visiting players were barred from suiting up. INQUIRER PHOTO/AUGUST DELA CRUZ

MANILA, Philippines–The Last Home Stand All-Star Charity event took on a disastrous twist Tuesday night when what was initially scheduled as a match between the Gilas Pilipinas basketball squad and a group of NBA All Stars turned into a glorified training camp after the visiting players were barred from suiting up.

An atmosphere that started with a lot of electricity and anticipation ended in an awkward reception that crescendoed into boos and angry curses after an announcement made by national coach Chot Reyes that what was on the menu for the night was an open workout.

“We are going to show you how your Gilas Pilipinas will prepare for the Fiba World Cup,” Reyes told the crowd at the coliseum, a lot of whom paid as much as P24,000 for what was billed as an exhibition game and the last chance for the public to see the national team in action before it flies to Spain for the World Cup.

PLDT executive vice president Ariel Fermin also addressed the crowd, promising that organizers will refund those who did not enjoy Tuesday night’s serving.

Sonny Barrios, the executive director of Samahang Basketbol Pilipinas, whose president is PLDT/Smart top chief Manny V. Pangilinan, said the refund scheme was being put in motion because the telecommunications tycoon did not want the public to feel shortchanged.

In a press conference later in the evening, Pangilinan announced that Wednesday’s scheduled event has been canceled and a refund system will be put in place for ticket holders to Wednesday’s game.

“I’m extremely disappointed with the turn of events,” Pangilinan said. “But what is important is that we have a refund system in place and that we are canceling [Wednesday’s] event.”

Reyes later admitted that the players were scared of sanctions that would be slapped on them if they suited up for a game. NBA players are barred from playing in nonsanctioned events during the off-season.

“Players got scared [of possible sanctions] that’s why there was not even a 5-on-5 after the training session,” Reyes said.

A source close to the PLDT top brass said the telecommunications company entered into an agreement with a US-based events group in good faith that the NBA players would play against Gilas Pilipinas.

PLDT, however, was informed by the group hours before the event that the players were barred from playing.

But Fermin told reporters that this was exactly what was planned for the night.

“We never said in our print ads that there was a game. We said it would be a charity event,” Fermin said.

The event organizer, East West Group, which was the same group that brought in Kobe Bryant, Kevin Durant, Derrick Rose and others for a pair of exhibition games previously, echoed the same line.

“If you look back, we were very careful that we would not announce a game,” said East West Group’s Chao Espaldon.

Espaldon admitted, however, that they were aware of expectations raised that a game would be played because of what the group had accomplished when they brought in Bryant and company the last time around.

But the crowd saw the night for exactly what it was.

Minutes into the open workout, the audience started voicing its displeasure, with some even cursing while the workout was in progress.

“This is disappointing,” said Rocky Asuncion, who traveled all the way from Nueva Ecija to watch the event. “We had to miss work and travel for three hours to make it here expecting to watch a game.”

Fermin told reporters they would announce the hotline for those who would want their tickets refunded.

“Kung ’di sila masaya, puwede magpa-refund, pero sana naman ’wag (If they are unhappy, they can always get a refund but I hope they won’t),” Fermin said.

Just minutes after the announcement, the criticism of how the event turned out became a trending topic on social media.

“We would like to apologize. We at PLDT extend our sincerest apologies,” Pangilinan said.