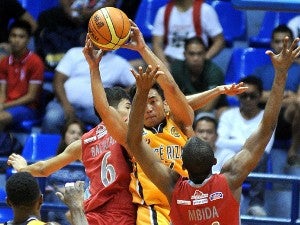 The Heavy Bombers found an unlikely hero in Dave Sanchez, who was at the right place and at the right time, turning garbage into gold after sticking back a missed 3-pointer by Philip Paniamogan with 2.3 seconds left.

JRU blew a 60-55 lead after Perpetual Help went on a 6-0 run inside the final two minutes for a 61-60 edge off an Earl Thompson steal against Paniamogan and layup with 11 seconds left before Sanchez bailed out the Bombers at the other end.

Paniamogan registered 16 points while the sparingly-used Sanchez had six points for host JRU, which evened its win-loss record to 3-1.

Juneric Baloria led all scorers with 22 points for the Altas, who suffered only their first loss in four games.