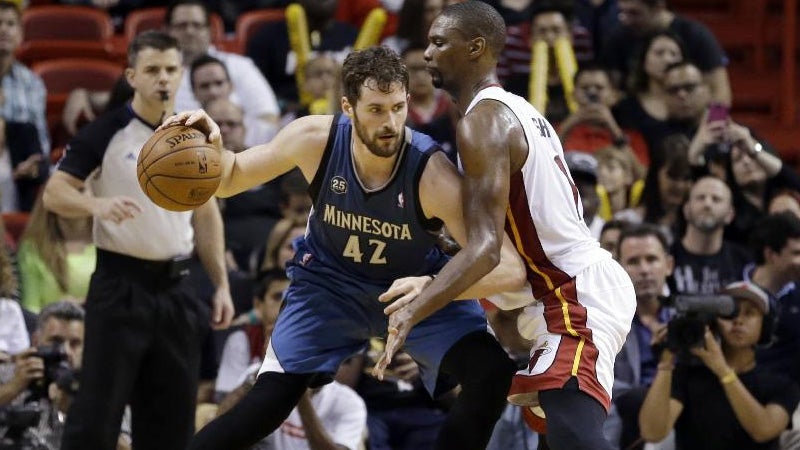 Kevin Love still doesn’t know where he will play next season, his NBA future hanging in the air while a seldom-used league rule complicates a potential trade to Cleveland.

The only thing certain from a basketball standpoint for Love is that he won’t be playing for Team USA this summer.

Love had to withdraw from Team USA’s roster while the Minnesota Timberwolves field offers for their three-time All-Star, a process that was extended when Cavaliers rookie Andrew Wiggins signed his contract this week.

Love is the latest All-Star to pull out of Team USA, which begins its training camp in Las Vegas next week to prepare for the FIBA World Cup in Spain. In recent weeks the Americans have lost Blake Griffin, LaMarcus Aldridge and NBA Finals MVP Kawhi Leonard. They have 18 players remaining and will choose 12 for the World Cup of Basketball roster.

Love, who won gold medals at the 2012 Olympics and 2010 world championship and was one of the first players to commit to play this summer, told USA Basketball chairman Jerry Colangelo that he would be unavailable for training camp that starts Monday.

”He wants to play but it’s a little bit of a sign of the times when you look at the league in terms of contracts, rumored trades,” Colangelo said. ”All of those circumstances put players in a funny position.”

The Cavaliers have been in pursuit of Love since before the draft. Their chances of landing Love, who can opt out of his contract next summer and has told the Timberwolves he wants to play for a contender, increased exponentially when LeBron James chose to return to play in Cleveland.

The Timberwolves have demanded Wiggins, the No. 1 overall draft pick, in a package in return for Love and the Cavaliers have gradually softened on their position to include the dynamic 19-year-old wing player in trade talks.

Under NBA rules, Wiggins cannot be traded until 30 days after he signed his contract with the Cavaliers. That means any possible deal could not be completed and announced by the teams until Aug. 23 at the earliest.

That length of time allows other teams to make offers for Love as well, but also makes it too risky for Love to participate with Team USA. An injury could derail any trade possibilities, so Love had to take the difficult step of informing Colangelo on Friday night that he would not be able to participate.

It had to be a tough call for Love to make. He has long held playing for Team USA as one of the highest honors possible and has referred to his experience of winning gold in London as the pinnacle of his young career. While other big stars like James were stepping away from the team to get some rest this summer, Love took pride last year in joining with Kevin Durant to be among the first elite players to recommit to the World Cup team.

”I think he truly is remorseful,” Colangelo said.

Love was a vital piece to the London team, giving the Americans a rebounding presence and a much-needed big man to stretch the floor. But Colangelo said the team would be able to get by without him, pointing to an experienced roster and rising star Anthony Davis, who was on the Olympic team but played only sparingly.

”It’s not like there’s a barrel full of power forwards that can rebound and shoot the ball like Kevin Love,” Colangelo said.

But in international competition, where teams generally play smaller than they do in the NBA, players such as Indiana’s Paul George and Dallas Mavericks forward Chandler Parsons could help fill the void. DeMarcus Cousins, Andre Drummond and Kenneth Faried are the other big men on the roster that could give the Americans a presence in the paint.

”Someone is going to have an opportunity to step up,” Colangelo said. ”We’re kind of anxious to get started to look at this.”