Dooley: What Schrock did was ‘unprofessional, selfish’ 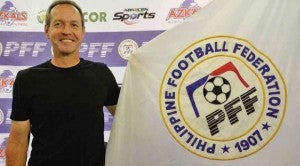 MANILA, Philippines-Thomas Dooley, the head coach of the Philippine Azkals, has fired back with a maelstrom against Stephan Schrock who has recently quit the team.

Dooley said in a press conference Thursday in the Philippine Football Federation office in Pasig that the accusations of midfielder Stephan Schrock towards the national team was “unprofessional” and uncalled for.

On Monday, Schrock announced that he was quitting the Philippine team. A day later, he revealed that he did not like playing for Dooley.

Dooley called Shcrock, who accused the head coach of favoring the local players instead of those footballers who have played in the European leagues, as “selfish” and a plague to the team.

“What Stephan did was unacceptable, unprofessional, selfish—you cannot have a player like that on a team,” Dooley said. “Players like him make a mess everywhere. He would not play anymore.”

“If the player is selfish, then the team would have a problem,” Dooley said.

In retrospect, Dooley compared Shrock to one veteran of the Azkals, forward James Younghusband.

“James was calling me, talking to me about the situation, and he was doing everything he can to get back in the lineup. That’s professionalism.”

He said that all the brouhaha surrounding Schrock started when the forward was taken out of a game and was given limited playing time due to his injury. “You see that you have several players on the bench who are fit, what would they think,” Dooley said.

Dooley added that he never kicked Shrock out of the team.

Dooley said Cagara, like Schrock, took to social media to air their grievances.

Despite the departure of the players, PFF President Mariano Araneta Jr., who himself was a former footballer for the Philippines, said he respects the decision of the three for leaving the national team.

“We respect their decision not to play for the team anymore, we have to move on,” Araneta said.

Schrock, another player quitting Azkals because of coach

Read Next
‘Clutch’ Ravena lifts Eagles past Tigers
EDITORS' PICK
Honolulu Café is the cure for your Egg Tarts and Roastings cravings
Luxe property: A way to build, preserve wealth
House energy committee chair Arroyo bats for cheap electricity
DOJ-led panel drops 29 cases of torture, EJKs
Duterte signs law giving rights, more protection to foundlings
Comelec won’t proclaim party-list groups yet
MOST READ
Heart Evangelista gets a ‘no’ from Chiz Escudero after asking, ‘Do I deserve a bag?’
Pahiyas Festival back but tourists greeted with austere celebration
PH logs 110 new COVID-19 cases; active down to 2,487
Man posing as Marcos spox revealed to be an inmate in Bilibid — Guevarra
Don't miss out on the latest news and information.