MANILA, Philippines – Last August 15, FOX International Channels (FIC) unveiled the new and unified look of its 3-prong sports platforms, integrating its former sports channels FOX Sports, Star Sports and FOX Sports Plus, into one consolidated FOX Sports Network. The move was made by FIC in order to provide consistency in branding across all channels, turning FOX Sports, Star Sports and FOX Sports Plus into to Fox Sports, Fox Sports 2 and Fox Sports 3, while retaining the existing FOX Sports News channel and FOX Sports Play, its sports program catch-up portal. FIC thereby turns each channel into a unique sports destination catering to every like and taste of the discerning Filipino sports fan, transcending just television and breaking new ground in giving sports fans what they want, anytime, wherever they are.

The rebrand of the network aims to change the way fans view sports by providing localized content and sports entertainment to add to the timely and accurate coverage of marquee sports events around the world that has made the brand a leading sports outfit in the region. Viewers can expect to see newly-acquired sports properties like Formula-E, which starts on September 13, 2014, the German Bundesliga, which starts in August 2015, as well as two new programming blocks: FOX Sports Flicks, which showcases timeless sports-themed movies and documentaries and the Fitness Block gives viewers programs to help maintain a healthy and fit lifestyle. 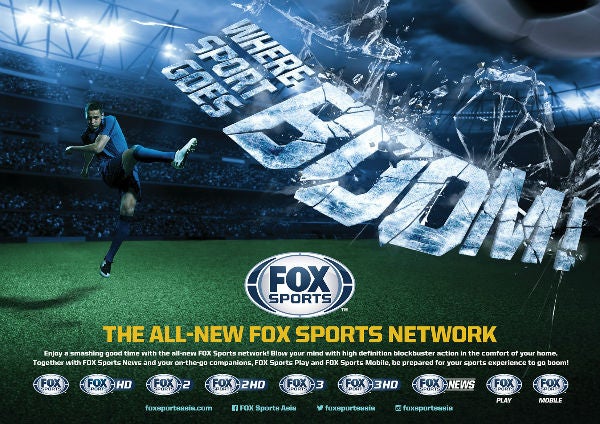 The flagship channel, FOX Sports, will feature key events like the NBA, PBA and NASCAR, as well as football events such as the Liga BBVA, AFC Champions League, AFC Cup and AFF Suzuki Cup. FOX Sports will also include FOX Sports Flicks and the Fitness Block, along with the iconic sports show FOX Sports Central.

FOX Sports 2 is the channel dedicated to ball sports, racquet sports, athletics and more, featuring three of the four tennis Majors: Wimbledon, French and Australian Opens. The channel also features all of the marquee golf majors such as the Masters and the Open Championship (formerly known as the British Open), to name a few.  European and Asian Football also makes a home on Fox Sports2, along with Major League Baseball, triathlons, marathons and more. For motor sports junkies, FOX Sports 3 will feature adrenaline-pumping sports programs, bannered by no less than Formula One and MotoGP, and flanked by combat sports such as classic boxing and kickboxing.

In addition to the familiar faces that viewers have been used to watching on FOX Sports and STAR Sports, viewers can look forward to new presenters who will make sports come alive with their analysis, comments and overall sense of fun. FOX Sports, FOX Sports 2 and FOX Sports 3 will also sport a new look with clearer graphics that will give viewers better information, and all studio shows will be presented in a brand-new, state-of-the-art studio in Singapore, with touch-screen analysis capability.

The all-new FOX Sports Network aims to embody its tag line, “Where Sport Goes BOOM!” and celebrate sports by giving the full experience: grit and glory, glamour and fun. FOX Sports goes beyond the definition of boom by featuring not just literal hits and scores in sports but also the rush of the win, the euphoria of victory, and other emotions felt in the playing and viewing of sports. The new FOX Sports Network gives access to a larger world of content that will both thrill and inform sports fans—all under one brand.

FOX International Channels (FIC) is News Corporation’s international multi-media business. We develop, produce and distribute 350+ wholly- and majority-owned entertainment, factual, sports and movie channels across Latin America, Europe, Asia and Africa, in 37 languages. These networks and their related mobile, non-linear and high-definition extensions, reach over 1.1 billion cumulative households worldwide. FIC is dedicated to delivering high quality content to its global viewers. We acquire, develop, produce and co-produce scripted and non-scripted programming for our linear and digital platforms including, most recently, the Golden Globes nominated and hit series The Walking Dead. FIC owns and operates four production studios around the world and is responsible for the creation of hundreds of TV hours, including but not limited to the critically acclaimed drama series’ KdAbra (Colombia) and The Monster of Florence (Italy).