The Philippines’ center Andray Blatche vies with Argentina’s forward Luis Scola during the 2014 Fiba World basketball championship’s group B match between Argentina and the Philippines at the Palacio Municipal de Deportes in Seville, Spain, on Monday, Sept.1, 2014. AFP PHOTO/PIERRE-PHILIPPE MARCOU

SEVILLE, Spain–Gilas Pilipinas tumbled to its third straight loss in the Fiba World Cup after flubbing several golden chances to turn it around in a wild and wholly game against Argentina.

And instead of pinning the blame on anyone else, coach Chot Reyes readily owned up to it.

The Argentines, the third-ranked team in the globe, barely survived the courageous Filipinos on Monday night (dawn of Tuesday in Manila), posting an 85-81 victory to be one of the Group B qualifiers for the KO stages.

Argentina trailed by as many as 10 points and almost lost a 15-point third-quarter lead, getting the goods from the stripe from NBA veteran Andreas Nocioni in the final 42.9 seconds before rising to 2-1 overall.

The Filipinos had three more possessions inside that span but were never able to get up a decent attempt as Jason Castro, with the score just 83-81, was called for a traveling violation that turned the ball over and led to the last two Nocioni freebies. 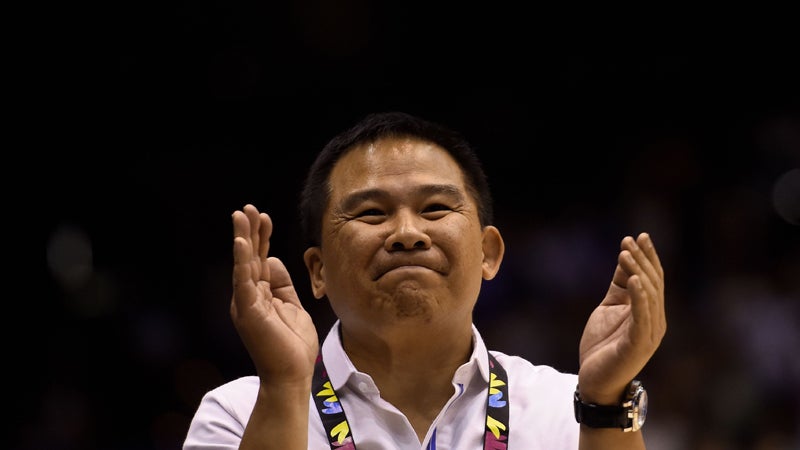 And this is where Reyes felt he didn’t do a good job.

“As a coach, it is my responsibility to get good shots for my players,” Reyes told a packed press room. “My only regret in losing this game is that my boys tried very hard and I wasn’t able to give them a win.

“I wasn’t able to give our country a win.”

Jimmy Alapag was responsible in getting the Nationals a chance to win in the end, hitting the last of his five triples at the 2:03 mark to shove the Filipinos within 81-82.

Reyes called a timeout with 24.4 seconds left and the Nationals having 14 seconds left in their shotclock. During the timeout, Reyes said that the play was really for the hot Alapag.

But the Argentine defense denied the 5-foot-8 former PBA MVP, and Castro was left trying to find him before trying to take a three-pointer himself which was contested brilliantly by Pablo Prignioni for the traveling violation.

It was the second close shave in three games for the Nationals, who also dropped a 78-81 overtime decision to Croatia in the inaugurals last Saturday.

Andray Blatche scattered 14 points in just 24 minutes because of foul trouble and Jason Castro finished with 11.