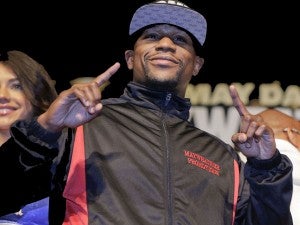 LOS ANGELES — The former fiancee of Floyd Mayweather Jr. claims in a civil lawsuit that the superstar boxer beat her during their relationship and later publicly humiliated her by posting on social media a sonogram of her pregnancy and saying they broke up because she got an abortion.

Shantel Jackson said Mayweather also threatened to post naked photos of her online if she didn’t take down a photo she posted of herself with rapper Nelly at a basketball game in April.

Jackson read a tearful statement in the offices of noted attorney Gloria Allred in which she said she and Mayweather were together for seven years and that she loved him and thought they would always be a couple. She said she finally left Mayweather after concluding he was abusive and would not change.

Allred did not specify damages in the suit against Mayweather, the unbeaten boxer who Forbes said was the highest paid athlete in the world in the last year, with earnings of $105 million. She declined to say whether Jackson actually got an abortion when pregnant with twins by Mayweather, but said Jackson told Mayweather in January that the pregnancy was terminated.

The lawsuit was filed Thursday in Superior Court in Los Angeles nine days before Mayweather returns to the ring Sept. 13 in Las Vegas in a rematch against Marcos Maidana. Calls to Mayweather’s representatives were not immediately returned.

Mayweather served two months in jail in 2012 after pleading guilty to reduced domestic battery charges stemming from a hair-pulling, arm-twisting attack on his former girlfriend, Josie Harris, while two of their three children watched.