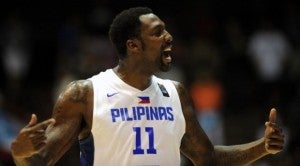 No less than Fiba secretary-general Patrick Baumann signed the letter addressed to his IAGOC counterpart Jo Youngha, which asked the committee to basically settle what he says is its “misunderstanding” with the Philippines and uphold Fiba rules that govern basketball events all over the world.

Baumann also pointed out that since Fiba will be running—and runs the cage shows in any regional event including the Olympics—the Asiad, the body’s judgment on Blatche should be upheld and the former Brooklyn Net in the NBA be allowed to play.

“I am sure, therefore, that there must be a misunderstanding and I would kindly request that you review your decision and ally Fiba’s regulations on eligibility for all teams participating in the basketball tournament at the Asian Games and re-enlist the Filipino player,” said Baumann in the letter.

Baumann’s letter is the Philippines’ final chance of getting Blatche in the roster for the Asiad  and give the country its best shot at the gold which the Philippines last won in 1962.

Baumann is the same official who enforced a long suspension on the Philippines at the height of the local squabble between the old Basketball Association of the Philippines and the now-ruling Samahang Basketbol ng Pilipinas last decade.

“Equally, if the same set of eligibility rules, namely that of the International Federation, is being applied to all international basketball events for national teams across the world, it ensures clarity for the media and the fans alike and credibility of the sport,” he wrote.

Ever since news of the Blatche case was broken by the Inquirer three weeks ago, stories have come up regarding the decision on his eligibility, with some sports officials saying that he had already been thumbed-down by the IAGOC.

But  Baumann’s letter changes the complexion of the case, as the Fiba has all authority concerning international tournaments. The Asian Games will use Fiba rules and its referees in conducting the competition in Incheon.

The SBP had, in fact, already asked the IAGOC for an extension to name its final lineup for the Games while at the same time seeking the help of the Fiba and Baumann.

The all-powerful Fiba sec-gen has been so impressed at how the Philippines is handling its basketball program that Baumann had invited SBP president, business tycoon Manny V. Pangilinan, to join him in the Fiba central board.