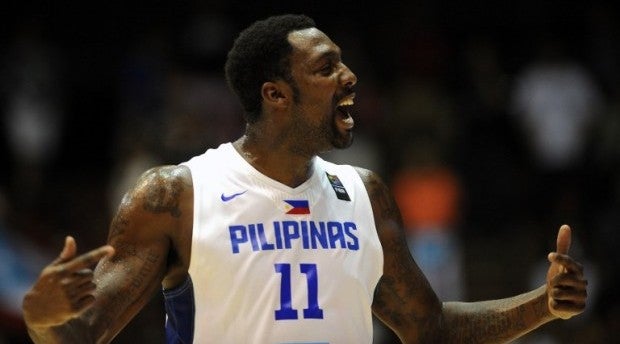 Not even the International Basketball Federation (Fiba), the prime authority in global basketball, could salvage the stint of Andray Blatche for the Philippines in the 17th Asian Games.

The Olympic Council of Asia rejected the plea of the world governing body for the sport Monday to have Blatche included in the Gilas Pilipinas roster set to play in the continental meet later this month.

With the rebuff, Samahang Basketbol ng Pilipinas vice chair Ricky Vargas said during a press conference yesterday that they may skip participation in the Asiad set Sept.19 to Oct. 4 in Incheon, South Korea.

“They probably saw how we played with Blatche. The games are going to be done in Incheon, Korea,” said Vargas.

“If you compare how we played in the Fiba World with Blatche, we’d probably have a bigger chance of winning the gold medal.”

Vargas said the SBP will make a last-ditch appeal during the delegation registration meeting in Incheon on Thursday and Friday.

Martelino, however, doesn’t have an accreditation that would give him a chance to seek an audience with the OCA and the Incheon Asian Games Organizing Committee.

Vargas said the SBP received an e-mail from Olympic Council of Asia member Haider Farman stating that Blatche, who gained Filipino citizenship through naturalization, was ineligible to play because the former Brooklyn Net in the NBA lacked the required three-year residency in the Philippines.

If the appeal is turned down, Vargas said they would ask the OCA to allow Marcus Douthit to suit up instead.

Elevating the case to the Swiss-based Court of Arbitration for Sports also looms as an option for the SBP.

The 6-foot-10 Douthit, who helped Gilas win a silver medal in the Asian Championship in Manila last year to qualify for the Fiba World Cup,  was not in the final 12-man Asiad lineup that the SBP submitted last month.

“We want to be able to send the best team we can give,” said Vargas.

“We cannot just not try and allow these things to happen without fighting for our rights,” he added.

In a clearly defined letter to the Incheon Asian Games Organizing Committee (Iagoc), the Fiba had urged the Asiad organizing committee to apply Fiba’s regulations on eligibility for all teams participating in the Asian Games and re-enlist Blatche in the Gilas lineup.

Blatche, a 6-foot-11 center, boosted the national team’s campaign in the Fiba World Cup in Seville, Spain, where  the Filipinos finished with a victory over Senegal after narrow losses in the first four games.

The Olympic Council of Asia, as the chief organizer of the Asian Games, has laid down the guidelines for eligibility along with the Iagoc while the Fiba Asia, mandated to head the affairs in the continent under Fiba, takes care of the technical aspect of running the competition, including fielding its referees.