Could Pacquiao fight be in cards for Mayweather? | Inquirer Sports

Could Pacquiao fight be in cards for Mayweather? 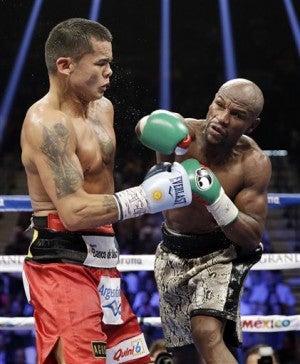 Floyd Mayweather, right, follows through on a punch at Marcos Maidana during their title boxing match Saturday, Sept. 13, 2014, in Las Vegas. Mayweather outboxed Maidana in their rematch. And it might open the door—if just a crack—for the fight with Manny Pacquiao that boxing fans have been craving for years. AP Photo/John Locher

LAS VEGAS—Floyd Mayweather Jr. may have boxed himself into a corner by outboxing Marcos Maidana in their rematch.

And it might open the door—if just a crack—for the fight with Manny Pacquiao that boxing fans have been craving for years.

“If the Pacquiao fight happens, it happens,” Mayweather said Saturday night after disposing of Maidana for the second time in four months. “You can ask the same questions and get the same answers. I call my own shots.”

That Mayweather is even acknowledging the possibility of a fight with Pacquiao is significant, since his previous stance had been to ignore his Filipino rival. But it may be that Mayweather has little choice but to turn to Pacquiao for a huge money fight as the careers of both fighters draw to an end.

A lot of that will depend on the pay-per-view numbers for the second Maidana fight. What they say about Mayweather’s drawing power likely will determine his next steps.

The first fight didn’t sell well on Showtime—at least by the lofty standards of the pay-per-view king—and with the promotion for the second clouded by Mayweather’s comments on Ray Rice and domestic violence, the general feeling among boxing executives is that the rematch may have done even worse.

Add the fact that Mayweather didn’t win any fans by mostly playing defense against Maidana and it’s hard to see how that will change for his next bout, which likely will take place next May.

“We’re not sure what the game plan is,” Mayweather said. “I’ll probably fight in May. I may not fight until September.”

Mayweather’s most probable opponent for a fight in May would be Britain’s Amir Khan, who took himself out of contention for Saturday’s fight because he wouldn’t be able to train properly while observing Ramadan. But while Khan would help boost sales overseas, he has lost two of his last five fights and is not popular enough in the US to help sell pay-per-view.

Mayweather’s continued refusal to fight Pacquiao or any other fighters promoted by Bob Arum limits the pool of possible opponents. That’s why Maidana got a rematch despite no real outcry by boxing fans for it but it may be beginning to cost Mayweather where it really hurts—in his wallet.

Mayweather’s $32 million payday for Maidana brought his earnings in the past year to $100 million in three fights, but he has only two fights left on a six-bout deal he signed with Showtime. The network would like to see him fight someone who might help him sell more PPVs, and Mayweather himself would earn more money from his cut of the revenue if he boosted sales.

Mayweather had little trouble against Maidana in their rematch, moving from side to side and frustrating the Argentine while winning many of the early rounds. But the crowd at the MGM Grand booed at times because Mayweather wouldn’t engage in the brawl that Maidana desperately needed.

“I felt sharper in the first fight, my rhythm was off,” said Mayweather who was roughed up by Maidana in May on his way to a majority decision. “I got hit with some shots tonight I shouldn’t have gotten hit with. But that comes with the sport.”

Mayweather was in control of the bout until the eighth round, when he claimed Maidana bit him on the hand in a clinch after first trying to hit him below the belt. He said he couldn’t use his left hand the rest of the right because it went numb.

Maidana denied biting Mayweather, and said Mayweather was sticking his glove in his eye in the exchange.

“How can he say I bit the glove with my mouthpiece?” Maidana asked. “I’m not a dog.”

Mayweather said before the fight that his last two fights will take place next year, and that he would retire with a 49-0 mark. Many in boxing, however, believe Mayweather would go for a 50th win to surpass the unbeaten mark of 49-0 held by the late heavyweight Rocky Marciano.

That could mean a megafight with Pacquiao in the spring of 2016, perhaps to open a new arena being built by the MGM on the Las Vegas Strip.

Asked if a fight with Pacquiao would be realistic, Mayweather was as evasive as he was in the ring with Maidana.