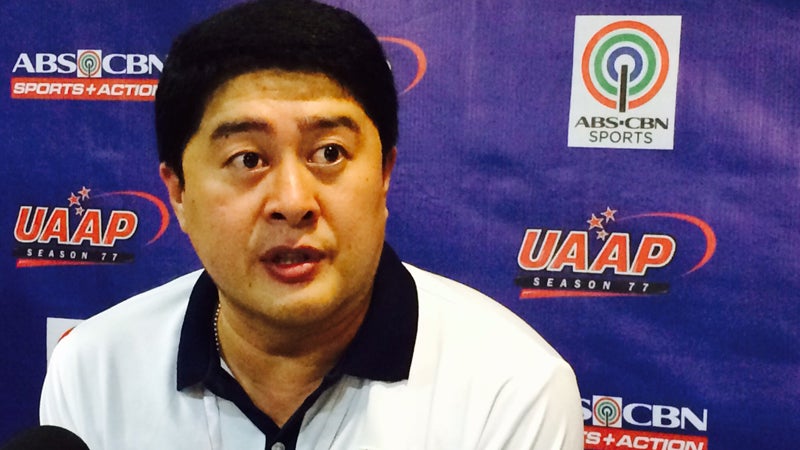 Adamson head coach Kenneth Duremdes tried to fight back his tears when he spoke with the media following an emotional win over UP Tuesday. Mark Giongco

MANILA, Philippines — Adamson got back at University of the Philippines with a 67-63 victory to avoid a winless campaign in the UAAP Season 77 men’s basketball tournament Tuesday at the Smart Araneta Coliseum.

“Tears of joy,” said an emotional Adamson head coach Kenneth Duremdes, who was in tears during the school hymn. “It was a sweet victory, we ended the season on a winning note.”

Graduating skipper Don Trollano left it all out on the floor in his final game wearing Adamson’s colors and finished with the game-high 21 points, 13 in the final two quarters.

“Very happy,” said a beaming Trollano in Filipino. “Of course I don’t want to leave Adamson without a win.”

The Falcons rallied from a double-digit deficit in the first half before building their own lead in the fourth quarter.

The Fighting Maroons knotted the count at 63 after trailing by as much as 10 in the fourth quarter before Dawn Ochea put the Falcons ahead for good, 65-63, with under a minute left.

UP had another crack to either force overtime or salvage the win but Mikee Reyes’ three-pointer from the left corner was off.

Axel Iñigo clinched the game with two free throws with 1.6 ticks to go.

Diego Dario led a Maroons fightback with eight of his 13 points in the payoff period.

UP beat Adamson, 77-64, in the first round. The Falcons and the Fighting Maroons end their season with identical 1-13 records.