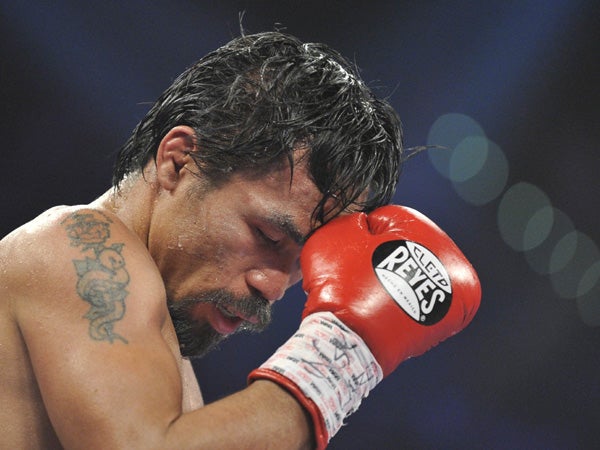 GENERAL SANTOS CITY, Philippines—Manny Pacquiao’s trainer, Buboy Fernandez, said he does not expected Chris Algieri to be much different from the Mexican boxers that the Filipino southpaw had demolished in the ring.

This is the same reason Pacquiao would be training the way he did prior to his fights with Erik Morales and Antonio Margarito — light compared with how he trained against other opponents.

“I watched the Chris Algieri-Ruslan Provodnikov fight live. And now, we already have a game plan on how to defeat him. The November 23 Pacquiao-Algieri fight would just be similar to the Pacquiao-Morales and the Pacquiao-Margarito fights,” Fernandez told the Inquirer here on Tuesday.

Algieri, while as tall as Margarito, is not as heavy handed as the Mexican boxer.

And compared with American Timothy Bradley, Algieri is slow, he said.

“Bradley is much faster than Algieri. If our boxing icon can hit a faster boxer like Bradley, how much more a slower fighter like Algieri?” Fernandez said.

On Monday, Pacquiao skipped jogging after getting tired from playing basketball the night before. The Sarangani lawmaker is a playing-coach of the KIA team in the Philippine Basketball Association.

But Fernandez said this was no cause for concern.

“There’s nothing new about it. He’s been playing basketball for a long time. I trust his judgment and he knows his body much better than us. He knows if he can handle it or not,” Fernandez said.

“No need to hurry. Our fighting congressman stays in shape even without a fight by playing basketball. Actually, we are starting early. So, this is just a light, not rigid or rigorous, training. This is just to make sure that when Coach Freddie Roach arrives, he is already prepared for heavy training,” said Fernandez, who is also Roach’s assistant coach for Pacquiao.

Fernandez said Pacquiao’s training would be so light that he would go for just five to six rounds at the track oval during roadwork before doing four rounds hitting the mitts, shadow boxing and performing abdominal exercises.

“We will focus on our game plan, technique and footwork. Algieri loves to run around the ring and we must devise a strategy to cut him,” he said.

If there is another thing that Pacquiao needs to be careful about and should be on guard against is Algieri’s left upper cut, he said.

“He loves to throw a left upper cut from the center and our very own ring icon must watch for it. This guy has the attitude to lean on the ropes and this is an advantage for (Pacquiao). A fighter leaning on the ropes is his favorite,” Fernandez said.