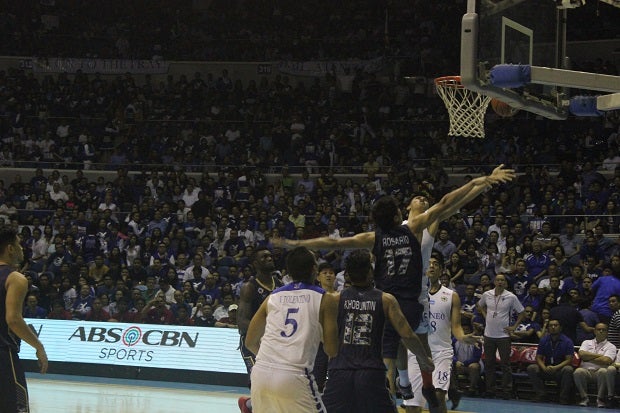 The Bulldogs—the only team Ateneo hasn’t beaten in six games since last season—stunned the No. 1 Blue Eagles yet again, salvaging a 65-63 decision in a huge Final Four shocker to advance to the UAAP men’s basketball championship for the first time in 44 years on Wednesday at the packed Smart Araneta Coliseum.

“When you look back two weeks ago, this was far-fetched,” NU coach Eric Altamirano said after his No. 4 Bulldogs overcame the Eagles’ twice-to-beat semifinal advantage.

“I have to give it to the boys. They refused to lose, they refused to give up. There were times in the game when we were already down, but they stay focused. They kept on fighting and stayed together,” he added.

Far Eastern University (FEU), though, made sure there will be no upset in their own Final Four series as the No. 2 Tamaraws dethroned the La Salle Green Archers in another heart-stopping duel, 67-64, to nail the last title berth.

Stellar all season, Mac Belo again emerged as the hero for the Tamaraws , knocking in the game-winning triple at the buzzer to lead FEU back to the finals after three years.

With only 24 seconds left to execute the game-winner, FEU’s ace guard Mike Tolomia ran out the game clock before dishing out the ball at the perfect time to Belo, who was waiting at the right corner.

FEU coach Nash Racela admitted it was actually a broken play for the Tamaraw, who nearly blew their twice-to-beat incentive after the Archers forged a knockout game with a 94-73 rout last Saturday.

“The last play was designed for Tolomia, but in the end, he made the most important decision of his career. He didn’t force it,” said Racela.

FEU and NU will battle in Game 1 of the best-of-three championship showdown at 3:30 p.m. this Saturday at Mall of Asia Arena.

Since the league adapted the Final Four format in 1994, it will be the first time Ateneo and La Salle will be a no-show in the title round.

Either one of them has reached the title series in the last 20 years.

The Bulldogs also turned to their leader in the end-game as Gelo Alolino, who fetched a foul from Ateneo’s Nico Elorde, was sent to the free throw line with just 9.3 seconds and coolly sank the pressure-packed baskets that turned out to be the game-winner.

Alolino also knocked in a clutch triple that knotted the contest, 63-63, at the two-minute mark after the Eagles rallied behind season Most Valuable Player Kiefer Ravena and Chris Newsome to grab the lead one last time, 63-60.

“We knew where they were going and I thank Alfred Aroga for bailing us out again on defense with his blocked shot,” Altamirano said.

Belo drained a game-high 23 points, including 10 of the Tamaraws’ last 12 points inside the last four minutes.

“Tsamba lang (It was just luck),” Belo said of his dagger shot that ended the Archers’ back-to-back title bid.

It was clearly far from luck, though, as the Tamaraws showed sheer toughness behind Belo, who also had a notable 8-of-14 shooting clip aside from posting eight rebounds and two assists.

Tolomia finished with 14 points and 6 assists, while Roger Pogoy chipped in eight points and 11 boards for the Tamaraws.

As the Eagles set their final play to win the game, or to at least forge overtime, power fluctuated at the Big Dome and the lights inside the court suddenly turned dim.

Both teams waited it out for the lights to get restored, which got the crowd restless as fans on the NU side even mockingly trained the flashlights in their mobile phones on court to egg on officials to resume play.

“The power fluctuation during the game was due to severe weather conditions outside,” a statement from Araneta Coliseum said. “Circuits of the whole Cubao and Kamuning area were affected.”

The incident, though, hardly mattered for the Bulldogs as the former league whipping boys marched to the finals for the first time since bowing to University of the East in the 1970 championship.

“I just told them (Bulldogs) to relax, don’t try to exert energy while you’re on the bench, stay focused and wait until it’s time for us to return in the court,” said Altamirano. “In that last play, I think it was favorable for us because we were on defense. It was hard for them (Eagles) because they had to rest. It was like you’re starting from scratch.”

Aroga posted a double-double of 14 points and 12 rebounds to power the Bulldogs, who led by as many as 12 points in the first half, 25-13, before surviving the Eagles’ late fightback.

Alolino—who also sank four clutch free throws inside the last 31 seconds of the Bulldogs’ first semifinal upset win over the Eagles, 78-74, on Wednesday—finished with 12 markers, five rebounds and a couple of assists.

“I’m just happy to lead this team,” said Alolino, a fourth-year guard. “But it was really a collective effort.”

“It could have really gone either way. It’s just a shame that we were not able to finish it and put it into overtime,” said Ateneo coach Bo Perasol after the Eagles ended up as the only second No. 1 team to fail to advance to the finals.

It was the Bulldogs, however, who suffered the ignominy just last season of becoming the first top-ranked team to embarrassingly fail to reach the title round when they blew their twice-to-beat advantage against then No. 4 University of Santo Tomas.

“Thank God for giving us another opportunity to redeem ourselves. Who would have thought we would get into the finals,” said Altamirano. “What happened to us last year was really to build our character. Come to think of it, that made us tougher especially our veterans.”

The gung-ho Bulldogs incredibly survived their third do-or-die game since fighting for the last Final Four slot against University of the East in a playoff match.

“It was really hard. We had to go through the playoffs to the Final Four,” Altamirano said of his Bulldogs, who were at the brink of elimination just two weeks ago.

“We fell short, that’s the bottom line of that,” Perasol said. “Everybody knows we’ll go to Kiefer [for the last shot], whether it was a three-point shot or a two-point shot. They were just too quick to block it.”

Newsome, the Filipino-American hotshot who played his final year, paced the Eagles with 22 points and six rebounds.

Ravena, who came through the clutch many times over for the Eagles this season, just couldn’t muster the same magic against the Bulldogs and finished with 18 points on a woeful 25 shooting clip percentage.

Ravena had always struggled on the floor against the Bulldogs, who raised their head-to-head record against the Eagles to 6-0 since last year.

NU also emerged triumphant in women’s action as the Lady Bulldogs moved within a win of a perfect season after trampling on the Lady Tamaraws, 80-58, at the start of their title series.

Season MVP Afril Bernardino (12 points and 10 rebounds) and Gemma Miranda (12 points and 11 rebounds) set the tone for the rout to lead the Lady Bulldogs, who hold a thrice-to-beat incentive after a 14-0 sweep of the eliminations.

The Archers grabbed the lead one last time at 59-55 after an Arnold Van Opstal three-point play and a Julian Sargent triple.

But Belo responded with back-to-back baskets to tie the game, 59-59, and later buried another clutch three-pointer that shattered a deadlock at 61 for a 64-61 FEU lead with 65 seconds to go.

“At least it’s different this time,” Racela said after his Tamaraws and the Bulldogs eliminated glamour teams Ateneo and La Salle.

Read Next
Caluag ends PH gold drought
EDITORS' PICK
Unemployment rate up to 6% in May
House energy committee chair Arroyo bats for cheap electricity
High-risk pregnancy: Reducing your risk is in your hands
High inflation: Your P1 is now worth only 87 centavos
Geek out at TOYCON 2022 powered by Smart Signature
Bye bye Boris: UK PM Johnson bows out with regrets but no apologies
MOST READ
Suspect in grisly killing of missing woman in Bulacan arrested
Kim Atienza’s daughter flaunts bikini body in response to critics of her ‘revealing photos’
Bongbong Marcos’ first order: Abolish PACC, Office of Cabinet Secretary
Ex-Defense chief Lorenzana is the new BCDA chair
Don't miss out on the latest news and information.