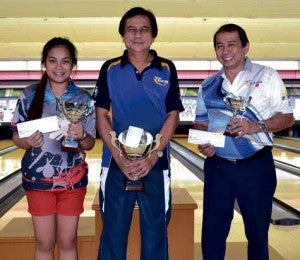 Frankie Uy became the third stalwart of the Sta. Lucia East Tenpin Bowling Association to win a group title in the 18th Sletba Open in Cainta, Rizal, on Sunday.

Uy carded a 10-game series of 2560 to bag the Associate Masters title, beating Jasha Jaron of TBAM-Prima, who had 2528, and fellow Sletba player Mil Tan, who had 2513.

Tan bagged the Seniors crown on Friday with Peping Chan snatching the Graded Masters class on Saturday. Only one division remained unclaimed—that of the Masters which was still being played as off press time.

Uy relied on superior experience and skill to thwart the challenge of the sweet-swinging, 19-year-old Jaron.

Tan, on the other hand, had to dig deep into his arsenal to keep two other TBAM-Prima youth upstarts in Kenzo Umali and Aaron Santos at bay and win his second major prize in the week-long tournament.

As in the last two completed finals, Saturday’s Associate Masters’ contest was a high-scoring duel among the 36 finalists. The well-kept lanes have so far produced four perfect games.

The annual tournament, which is sanctioned by the Philippine Bowling Congress, has the Inquirer and Inquirer.net as media partners.