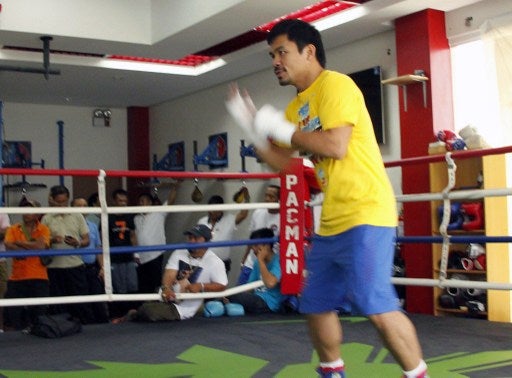 Stan Martyniouk, a 5’10 Junior Welterweight, bared that he was baffled by Pacquiao’s blinding speed during the sparring.

“He’s so quick, strong and tricky. You can hardly read his punches. No wonder, he’s the best pound-for-pound boxer in the world,” Martyniouk told reporters here Monday.

The Russian-born boxer said that another thing he admired most about Pacquiao was “his amazing footwork.”

He claimed that he got tagged several times during the sparring but said, “It was good and I enjoyed it.”

Chief trainer and head coach Freddie Roach was satisfied by the performance of his prized ward against Martyniouk.

“I’m very happy and satisfied with his performance in sparring. He is strong, moves well and based on what I saw today, I can say he knows how to adjust to the fighting style of Algieri,” Roach told reporters here.

Pacquiao’s next sparring day will be on Tuesday against a much bigger and taller Mike Jones (5’11 ½).

Both Jones and Martyniouk move and box inside the ring like American boxer Chris Algieri, according to Roach.

The Pacquiao-Algieri fight will happen on Nov. 23 at the Venetian Hotel Resort in Macau, China.

Members of the media were not allowed inside the Pacman Wild Gard Gym during the duration of the sparring session.

According to Roach, Pacquiao is way ahead of schedule as far as preparation for the Algieri fight is concerned.

The Hall of Fame coach also praised Pacquiao for keeping himself in top shape even during days when he’s not on training.

As an incentive, Roach said he would allow Pacquiao to play for a few minutes during the opening game of the Philippine Basketball Association (PBA) on Oct. 19 at the Philippine Arena in Bocaue, Bulacan.

Roach said he would be going with Pacquiao to watch him play in the PBA.

Roach claimed that Pacquiao agreed to refrain from playing basketball one month before his scheduled ring duel with Algieri to avoid injury.

“He promised me he would just play once in the PBA and that happened more than a week ago during the exhibition game. This coming Oct. 19, he told me he would focus on coaching. Maybe, I would allow him to play a few minutes for showing a good performance during the first day of sparring,” Roach said.

Pacquiao can coach but can’t play–Roach