Pacquiao ‘only needs to find his range and timing’ 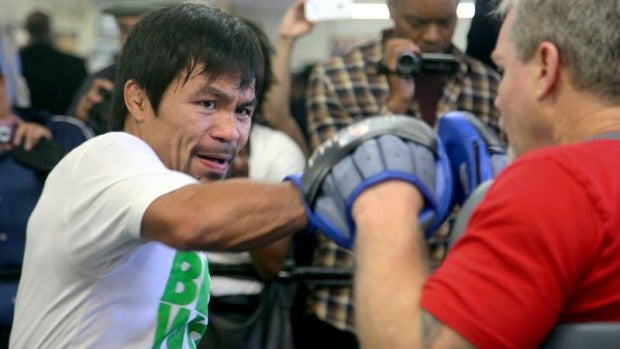 GENERAL SANTOS CITY—The moment he stepped into the ring for Manny Pacquiao’s first mitts session last week, Freddie Roach felt that his superstar ward had remained at the top of his game.

Pacquiao’s skills and reflexes were as sharp as ever.

“No slippage, not even a bit,” Roach told sportswriters after working out with the eight-division world champion Monday afternoon at Pacman Wild Card Gym here.

“He’s happy and still hungry (for training),” added Roach, who expects Pacquiao to win over unbeaten challenger Chris Algieri in their showdown for the World Boxing Organization welterweight crown on Nov. 23 in Macau.

“No worries, whatsoever,” added Roach, who has been Pacquiao’s trainer since 2001.

They have become so familiar with each other that their relationship transcends that of the trainer and his boxer.

In the ring, they are harmony in motion, as if they are just rehearsing what will happen come fight time.

Few words are needed. No wonder, Roach no longer sees the need for prolonged sparring sessions that in the past could reach as many as 150 rounds.

For the Algieri fight, set at a catch weight of 144 pounds, Roach feels 90 rounds of sparring will be enough for Pacquiao to get into the groove.

All that Pacquiao needs is to find his range and timing, according to the six-time Trainer of the Year.