BOCAUE, Bulacan — Manny Pacquiao will step into a huge venue packed with fans once again. But this time around, Michael Buffer won’t be the one doing the introductions, he won’t be wearing boxing gloves  and Freddie Roach will not be in his corner.

Today, Pacquiao, the only eight-division world champion and arguably the best pound-for-pound fighter ever, will have his ankles, and not his hands, taped. And probably for the first time in his life as a professional athlete, he won’t even be the main attraction.

Pacquiao will enter unchartered territory as he coaches and plays for KIA Motors when it makes its PBA debut as the league ushers in its 40th Season with the Philippine Cup eliminations with two games to follow after lavis opening rites at the 50,000-seat Philippine Arena here.

Selected 11th overall by KIA in the Draft last August, Pacquiao has been given the green light to play even for a few minutes, taking time away from his rigorous training for an upcoming fight with American Chris Algieri in Macau next month. 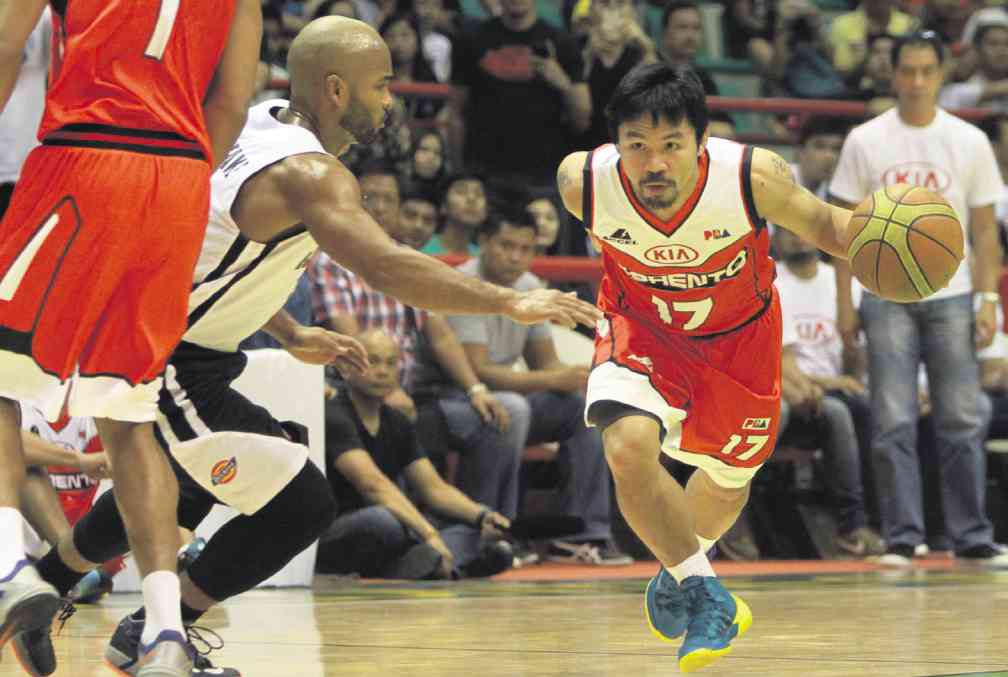 Though most everyone would want to see how he fares as a professional basketball player, there are a lot of things worth watching today as the PBA marks a milestone in its existence.

The KIA Sorento battle Blackwater Elite in the first game at 3 p.m. before Barangay Ginebra clashes with Talk ’N Text to touch off a busy first round where all teams play a minimum of 11 games each and only two of the all-time high 12 squads getting the boot.

KIA and Blackwater are newcomers like NLEX, which entered the league with a core of players after buying the Air21 franchise for an undisclosed amount.

Both the Sorento and the Elite will be hard-pressed to match up with any of the old regular teams, making this match a virtual do-or-die game since most predict that they could only get wins at each other’s expense.

KIA and Blackwater weren’t able to get direct-hire concessions from the PBA board and settled on building their respective cores through the Dispersal Draft and the signing of veteran and rookie free agents.

Rich Alvarez, the former Ateneo star who beat James Yap for Rookie of the Year honors when they entered the league, is the veteran presence in the KIA roster with Larry Rodriguez looming as the best — and most seasoned — player for the Elite.

The traditional parade of teams with their muses is another highlight of the day as teams have enlisted beauties like Alice Dixson and Sunshine Cruz and reigning Miss World Meagan Young.

KIA, just like it did when it made Pacquiao coach and a first round choice, also pulled out a surprise by enlisting Manny’s wife Jinkee as the team muse.

Talk ’N Text, meanwhile, will be looking to get back on top of this tournament after relinquishing the title last season to eventual Grand Slam champion San Mig Coffee, which will now play as Purefoods.

The Tropang Texters had won this tournament three straight years before failing to make the Finals last year, and they will be putting a young pair of guards to the test starting today — Kevin Alas and Matt Ganuelas.

Talk ’N Text has one of the oldest cores in the league with former MVPs Jimmy Alapag and Kelly Williams. Ranidel de Ocampo, Larry Fonacier, Ryan Reyes and Jason Castro are the other reliable stars returning for the Texters.

Alapag, the 37-year-old national team star, will be out of the first few Talk ’N Text games after coming off two hard tournaments for Gilas Pilipinas in Spain and South Korea over the past month.

Jong Uichico, the multi-titled mentor with San Miguel Beer and Barangay Ginebra, makes a head coaching comeback by calling the shots for the Tropang Texters vice Norman Black, who moved to Meralco to handle the Bolts, after failing to steer Talk ’N Text to a title last season.

Greg Slaughter is a year wiser, stronger and obviously better and will start owning this Ginebra team this season.

The 7-foot Slaughter was a force in his rookie season last year and now has a better understanding of what it takes to dominate this league, the same way that San Miguel’s June Mar Fajardo did last season when he won the MVP on his sophomore year.

Mark Caguioa, though, will continue to be the team leader of the Gin Kings.

Ginebra didn’t make a title series last season and is itching to get there once again.

Read Next
New PBA chair has big dreams
EDITORS' PICK
Acer Philippines welcomes you to its first flagship store
New Year, New Rediscoveries
CHEd steps into UP-DND row over ‘problematic’ accord, to broker talks
Is your company a growth champion? Stand up and be recognized!
Lacson advises vaccine czar to ‘watch his back’
Climate advocates among first to cheer new US president
MOST READ
Nissan to shut down Laguna plant
ABS-CBN makes bigger free TV comeback via TV5 partnership
Biden admin’s immigration policies to benefit Filipinos — Amb. Romualdez
Lacson advises vaccine czar to ‘watch his back’
Don't miss out on the latest news and information.