Manny Pacquiao a godsend for champ on ropes | Inquirer Sports

Manny Pacquiao a godsend for champ on ropes 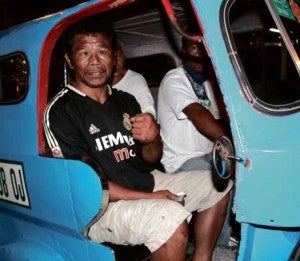 Like the superstar fighter’s fans, street hawkers and security personnel, he was patiently waiting for Manny Pacquiao.

Unlike the others huddled near the main entrance, though, he preferred to stay in the dimly lit corner.

Navarette, now a shadow of his former proud, wild self, avoids being seen and recognized these days.

Once known to ring buffs as the “Bad Boy from Dadiangas (Dadiangas was General Santos’ old name),” the World Boxing Council super featherweight king from Aug. 29, 1981 to May 29, 1982 once basked in the adulation of his countrymen, like what Fighter of the Decade Pacquiao now enjoys.

But Navarette knows he can’t hide in the shadows forever.

When Manila-based sportswriters saw him near Pacquiao’s glass-encased gym on the top floor of the building, he reluctantly dropped his defenses.

Navarette, stuttering in mild embarrassment, his eyes wandering as a result of the accumulated head blows he had absorbed in a ring career that spanned 18 years, said he has no permanent job and lives on a monthly city government stipend of P2,000.

He said he takes odd jobs in the city’s fish port to provide food on the table for two of his seven children from four former partners who now live with him.

His penchant for drinking, partying and women actually triggered his downfall.

He went to prison for over three years in Hawaii for rape. When he returned to the country, he co-starred in a movie (“Kambal na Kamao”) and got featured in an award-winning documentary (“Kamao”).

Turning to the demon drink, his savings gone, Navarette soon got embroiled in fights and feuds, almost always ending up on the receiving end.

He was hit with a steel pipe, clubbed with the shotgun’s barrel, and, in 2008, got stabbed in the neck.

But, since then, it has all been quiet for the hard-hitting lefty. Navarette makes do with what he earns.

Only during specially hard times when he runs to Pacquiao, also the representative of Sarangani province, for help.
On that humid evening at the arcade, Navarrete was again hoping that Pacquiao would see him and give him some money.
Finally at about 8 p.m., Pacquiao emerged from the building.

The crowd immediately milled around him.

After five minutes, Pacquiao was ushered into the back seat of his black Hummer SUV.

Just when Navarette thought that Pacquiao had not seen him, the Humvee’s front-left window rolled down and Pacquiao’s chief of security handed him a roll of bills.

Then the Hummer sped off. Navarette quickly put the money in a side pocket and flashed a smile. He boarded a passing tricycle and headed for his dirt-floored shell of a house.