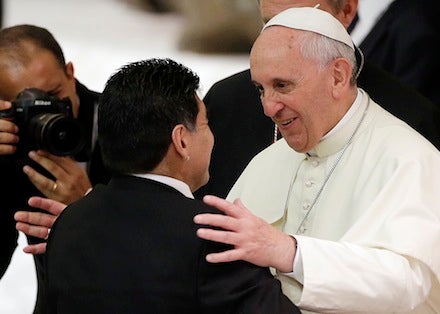 MANILA, Philippines — Not known to many, Pope Francis is an avid football fan who once organized an interreligious football match promoting world peace.

The charity football match was attended by football’s past and present stars and also gathered people of various religions to one pitch — a historic event held in Rome’s Olympic Stadium in September 2014.

Prior to the game, football greats led by Diego Maradona, arguably the greatest of all time, met fellow Argentinian Pope Francis at the Vatican.

Maradona also handed Pope Francis an Argentina jersey with the name “Francisco” emblazoned on the back with the same jersey No. 10 as the iconic striker.

And as the Pontiff makes his first trip here, people in Tacloban City, one of the places Pope Francis is set to visit during his five-day trip, will launch the Santo Papa Futbol Cup — a three-day football festival from Jan. 15 to 17 for the survivors of Supertyphoon Yolanda (international name: Haiyan).

The Papal Visit is centered on the victims of the Supertyphoon, which claimed thousands of lives in Eastern Visayas.

Last year, Pope Francis also met with team members of the San Lorenzo Club, a team he has supported since he was a kid.

The Pope also donated some of his prized football collections, including signed shirts and specially designed football boots to the Vatican Museums.

The boots sport the colors of the Vatican with the name “Francis” written on the side.

Kids to play football as therapy–and for Pope

Read Next
NBA: Wizards finally solve Spurs
EDITORS' PICK
COVID-19 cases in City of Manila are decreasing, says OCTA
Acer starts the year off strong with the Aspire Vero National Geographic Edition
The best of bayside and city living at SMDC’s Sail Residences
Gov’t rolls out COVID-19 vaccination in select pharmacies on Jan. 20 to 21
Over 3 Million worth of prizes to be won at Smart Padala’s SENDali Manalo Promo!
DOH: Too early to say COVID-19 cases are declining
MOST READ
Comelec junks petition to scrap Bongbong Marcos COC
In Batanes, octogenarian dies of COVID-19
Marcos Jr. visits Cebu, stands as ‘ninong’ to mayor’s son
When to get boosters after positive COVID test
Don't miss out on the latest news and information.