MANILA, Philippines—Just moments after they outclassed the Alaska Aces, 80-78, to win the 2015 PBA Philippine Cup, members of the San Miguel Beermen took to their social media accounts to share with their fans how they are celebrating the victory.

Finals Most Valuable Player Arwind Santos posted on Instagram a collage of photos featuring him with his teammates, San Miguel big boss Ramon S. Ang, and his children. 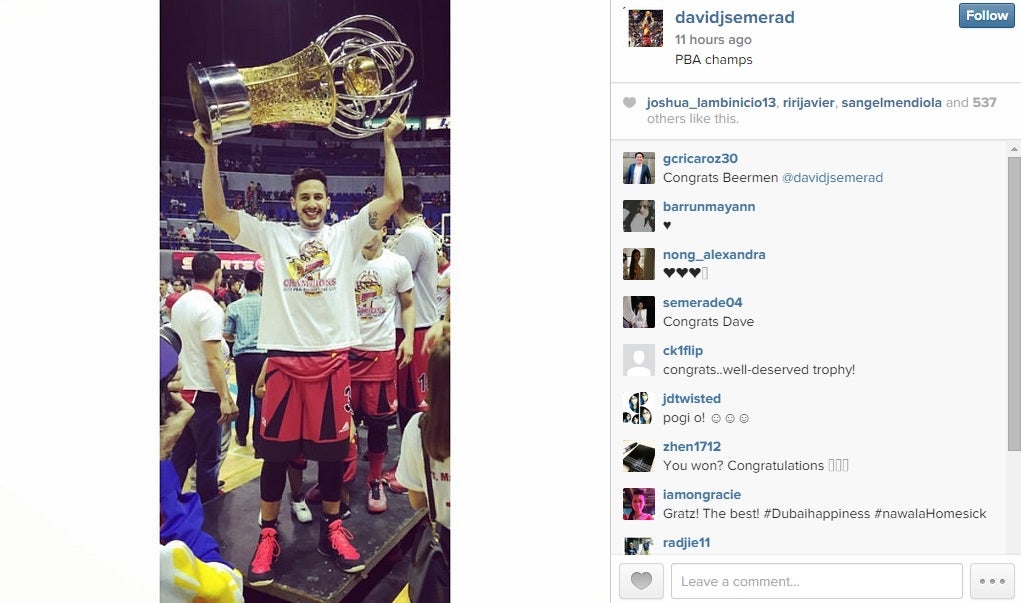 Rico Maierhofer posted a photo of the entire team with the hashtag Fear the Beer. Kramer also shared photos of him and his teammates and “bash brother” Semerad wet from bathing in beer. Semerad, meanwhile, posted a photo of him guarding long-time rival and Alaska ace player Calvin Abueva. The two have been gutting it out against each other since their college days in the National Collegiate Athletics Association (NCAA). Justin Chua, one of the youngest in the Beermen’s roster, posted a collage with the caption: “One in every division (I) go! I may not be the star nor play that much minutes, but (I) know deep inside (I) did my part to help the team win! To everybody who supported me, thank you!!! And lastly (I) wanna thank the MAN (upstairs) for guiding me and blessing me with these [championships] All the highs and lows always paid [off] cause [of] these trophies!!!” Chua has won the title in the PBA, the Southeast Asian Games, and the University Athletics Association of the Philippines (UAAP), among others.

The Beermen had to fend off the comeback and late-game rally of the Aces to notch their 20th title in the PBA. They were mentored by Leo Austria, who won his first PBA championship as head coach.

NOW EVERYONE KNOWS WHO SMB TEAM LEADER REALLY IS